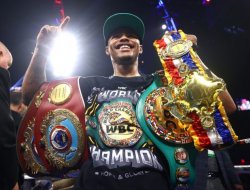 Prudential Center, Newark, New Jersey, USA. In the main event of the evening, American Shakur Stevenson (19-0, 9 KOs) beat the 2016 Olympic champion Brazilian Robson Conceição (17-2, 8 KOs), but was previously left without titles at the weigh-in. The WBC and WBO super featherweight belts (up to 59 kg) remained vacant.

The southpaw favorite worked more aggressively than usual, as promised before the fight. He went through several left hooks and straights. In response, Conceição threw twos, often shot at the body. A very competitive round.

By the 3rd three-minute period, Stevenson finally seized the initiative: he scored a left uppercut, which slightly shook Conceição, often punched through the body – often the blows flew a little lower than expected. The American set a comfortable distance, dictated the pace and density of the fight.

In the 4th round, the Brazilian twice visited the canvas. The referee took the second fall for a knockdown (left straight on the body). Stevenson practically broke his opponent. The third in the ring allowed the favorite to often shoot below the waist, step on his feet. Conceição practically went into survival mode.

In the 6th round, the referee finally warned Stevenson for low blows. In response, he began to hunt for the opponent’s head. It turned out successfully, since Conceição, out of habit, tried to close the body from blows. Solidly went to the Olympic champion.

In the 9th round, the referee penalized the favorite. No, not a blow below the belt – he threw it with a wrestling technique. Apparently, they are tired of clinches from the opponent. Wow! Stevenson repeated the trick in the 10th three-minute period – so you can lose by disqualification.

In the 11th round, Conceição was seriously shocked several times, but did not fall – Stevenson solidly pushed after two so-so three-minutes in a row. The final round was also dictated by the champion.