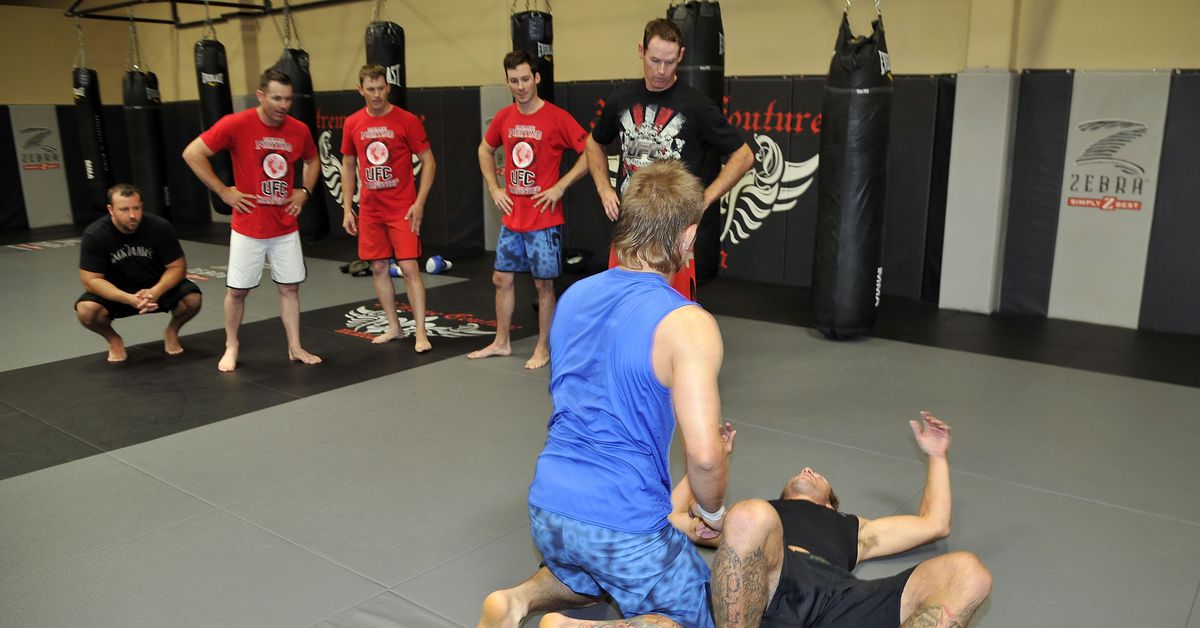 Middleweight Chris Curtis was chatting with a few teammates after a training session at Xtreme Couture when veteran MMA judge Doug Crosby was introduced to the group.

Fighters should know what judges are looking at, it was explained to him, and here was a working MMA judge to answer questions and explain how fights are scored. Curtis was just starting his camp for a UFC 282 fight with rival Joaquin Buckley. The idea of educating himself on how he was being evaluated sounded good.

After a few minutes, Curtis realized he would not get any of the answers he wanted. The more Crosby talked, he said, the more confused he and his teammates became. Every question the judge received, he said, was answered with a question, which was “immediately pissing people off.”

“I’m trying to get an answer, not have this philosophical Mr. Miyagi f****** debate,” Curtis told MMA Fighting.

At a certain point, he couldn’t listen any more.

“My family’s Southern,” said the UFC vet, who knocked out Buckley this past Saturday. “I’m super respectful, right, especially when an elder is speaking. I literally walked the f*** out of his conversation, like, ‘This is ridiculous.’”

A judge in dozens of high-profile MMA fights and a longtime movie stuntman, Crosby, an official who once referred to himself as the “judging genius” in a combative online tirade, is again at the center of controversy over a pair of scores he delivered at Bellator 289 and UFC 282. In the former, his 50-45 score in an interim bantamweight title fight was noted as the only time in a database’s history a losing fighter had swept the scorecards. In the latter, he was in the majority of a decision called one of the worst in UFC history, a unanimous call for Paddy Pimblett over Jared Gordon.

After the pair of events earlier this month, Crosby and the remaining two judges in the Raufeon Stots vs. Danny Sabatello fight have been ordered to review the fight and its scoring. If any of the judges are found to be performing below the required level, they could be benched from judging, according to Michael Mazzulli, the executive director of the Mohegan Tribe Athletic Department and chairman of the Association of Boxing Commissions.

Crosby’s most recent appearances allegedly also cost him an assignment on the UFC Vegas 66 fight card, multiple people with knowledge of the situation claimed to MMA Fighting. They requested anonymity because they were not publicly authorized to discuss the matter.

MMA Fighting sent several texts to a phone number provided to MMA Fighting and attributed by multiple MMA industry sources as Crosby’s cell phone (an independent web search of the number also turned up Crosby’s name). A person responded and signed several messages as “DC.” The person initially declined comment and did not respond to a request for a phone interview. But the person subsequently sent a series of long texts that appeared to be Crosby defending the gym visit.

The person wrote they went to several major MMA gyms, including Syndicate MMA, American Top Team and the UFC Performance Institute, to “listen to the fighters about what was important to them” on “my time.” The person claimed they had the “blessings and approval” of Xtreme Couture’s owner, UFC Hall of Famer Randy Couture, and wrote they were treated with “empathy, honesty, fairness and honesty.”

One day later, MMA Fighting received a text from the same number from a person who identified themselves as “Vince,” who wrote that he worked for Crosby as a stuntman. Vince said the number was not Crosby’s but a general office number, and the person that had responded was not actually Crosby but someone else “having you on for laughs.” Vince declined to give his last name, Crosby’s number — which he wrote was a “rotary mobile phone” — or that of Crosby’s assistant, Jen, whom he wrote was the only person who had the judge’s number.

To promote greater understanding of MMA judging and the current criteria used to score fights, the UFC and Nevada Athletic Commission have assembled several Q&A sessions using working MMA judges. UFC broadcasters and several well-known MMA coaches are among those who have attended. After dozens of high-profile controversies on judging, the promoter and regulator have taken a more proactive role in combating misinformation about what judges are looking at. Reviews from attendees have been largely positive, and the result of education have been heard in broadcasts when commentators remind the audience of the primary judging criteria, which weighs immediate impact from effective striking and grappling above all else.

Crosby was a part of one Q&A session, said Xtreme Couture’s Eric Nicksick, and the main reason the coach walked away with a sour taste in his mouth. In an interview with SiriusXM Radio, Nicksick called the veteran judge the “No. 1 outlier” among the officials during a Zoom meeting, alleging the judge was “combative” and “didn’t want to be there.” Later, he forwarded to MMA Fighting a screenshot that he claimed included Crosby’s camera view at one point of the meeting, which was angled up at a medicine cabinet under a faucet.

The coach told SiriusXM Radio that Crosby wanted to come to Xtreme Couture after the Zoom call and “explain his version of judging.”

“I was like, ‘Well, you’re in a Zoom meeting with all your superiors,” Nicksick told SiriusXM. “Why do you need to come on your own to come to talk to us about what you see and what you feel is right in judging? You had that platform right then and there. … I let him in the gym, I just left. I was like, ‘If you want to talk to whoever you want to talk to, but I’m just not going to sign off on that.’”

“The number one outlier in that Zoom meeting was Doug Crosby.”

Amid the judging controversies, Eric Nicksick (@Eric_XCMMA) discusses a meeting held by the NSAC a few months back between MMA judges and coaches. @RJcliffordMMA @AngieOverkill pic.twitter.com/PPcgZVZgAm

Neither the Nevada Athletic Commission nor the Mohegan Tribe Athletic Department were aware of Crosby’s gym visit until after the fact, NAC Executive Director Jeff Mullen and Mazzulli confirmed to MMA Fighting. Both declined to comment directly about Crosby, but Mullen said he had never before sent an MMA judge to a gym to educate fighters on judging.

Jake Ellenberger, a former UFC welterweight, wrote in a text that Crosby set up the Xtreme Couture meeting to “collaborate” with fighters and hear their concerns about judging. Despite that, he claimed the official was “blown off for the most part” but was positively received by Curtis and Xtreme Couture striking coach Nate Pettit.

When initially contacted about Crosby, Curtis sighed, “Oh, God. …. It’s the most nonsensical thing I ever heard.”

“He explained that you go to damage, if not enough of that, go to the second criteria, control time, but what is control time?” the UFC middleweight said later. “Just from hearing him speak, he doesn’t understand the sport. This man has never competed. [He kept saying], ‘I’m not a fighter. I’m a stuntman. I own a stunt company. I’ve worked with so-and-so guys.’ Essentially, he’s not a fighter. He’s a f****** stuntman. … He knows the key words, but he doesn’t understand what these words mean.”

“It scares me that that man is in charge of judging,” Curtis added. “Like, he has no idea what the f*** he’s doing.”

Pettit told MMA Fighting the “eccentric” and “smart” Crosby often sounded like a lawyer as he spoke with the fighters. He said Crosby was argumentative and overly talkative to a crowd that wanted something “short and sweet, and to the point.” Yet he thought it was a good idea the judge came to the gym for the educational opportunity he brought. So he invited the judge to the UFC Performance Institute during a wrestling practice.

A few of the fighters present stayed to listen to Crosby, Pettit said. But again, the judge’s style confused them.

“There was one fighter in particular … and the way that [Crosby] was talking, it was in circles like a lawyer talks, and he got frustrated and walked away,” Pettit said.

Pettit wants to see more ex-fighters get into judging. He wants to know that the people scoring the action in the cage have been through it themselves. It’s a job they could be put to after their careers are over.

“We can’t just keep putting the blame on these [old judges],” he said. “We need to fire these guys and get them out.”

Then again, Pettit said that even if Crosby had connected with the audience, his perspective was one of dozens of officials spread across different states with different backgrounds and rulesets.

Like the Bellator interim champ who lost every round of his title fight in Crosby’s eyes, Curtis hoped Crosby would never oversee one of his fights. As for how things could improve, he’s been texting with another source: Joe Rogan.

The popular podcaster and UFC commentator suggested firing older judges and making sure all of them had access to cageside monitors, Curtis said. It made sense to the veteran fighter. Interpreting the action (and explaining it to others) was one problem. Making sure they were capable of seeing it all was just as important.

“In MMA, there’s so many different nuances and facets of things that can be happening,” he said. “Not everyone is going to see everything. This system’s worked for boxing for a long time. I think MMA needs something a little more in depth to cover all the things that can happen in a fight.”