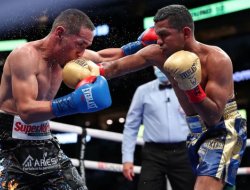 Gila River Arena, Glendale, Arizona, USA. In the main bout of the evening, cult fighters of the second flyweight (up to 52.2 kg) Nicaraguan Roman Gonzalez (51-4, 41 KOs) and Mexican Juan Francisco Estrada (44-3, 28 KOs) played for the vacant WBC world champion belt. This was the third confrontation between these legendary champions – before the fight, both had one victory.

The fight began at a leisurely pace and under the control of the underdog Estrada. He jabbed a lot, didn’t give Gonzalez the center of the ring. He did not force events, he looked closely. A little more active Chocolatito spent the second three minutes, but the efficiency remained at about the same level – Estrada moved well, stayed away from the ropes, worked ahead of the curve. The fighters bumped their heads. It’s good that there are no cuts.

Began! Gorgeous 3rd three-minute. Gonzalez finally upped the pace and density of the fight. But how well Estrada is ready for the fight – excellent work as the second number, smart counterattacks. It is possible that the score is 4-0 in his favor. It’s simple – he is more active than the favorite. It’s not easy for Gonzalez to prepare his series, it’s hard to get close. In his corner are very unhappy.

It is possible that Chocolatito is simply not the same as it was before. He has obvious problems with balance, does not finish on his feet. Because of this, sometimes you have to box with the second number. The Nicaraguan had a strong 8th round, but even in it he lost his advantage in the last seconds. His pressure is starting to show. He seized the initiative.

We have a break. Chocolatito slipped and fell in the corner of the ring. In vain, Estrada refused the jab. It is possible that he simply did not calculate the strength for the entire duel. The Mexican rallied and gave a chic 12th three-minute. I wonder what the judges will do. And suddenly a draw and fight number 4?