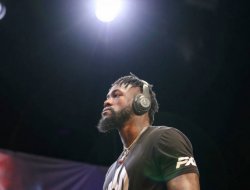 Yesterday, the former heavyweight champion American puncher Deontay Wilder (42-2-1, 41 KOs) held an open training session, after which he answered questions from the media – on October 15 in Brooklyn (New York, USA) he will fight with a veteran from Finland Robert Helenius (31-3, 20 KOs).

The puncher was asked to comment on the words of the current unified world champion Ukrainian Oleksandr Usyk (20-0, 13 KOs), who recently announced his desire to fight Wilder.

As always eloquent
answer Deontea: “His words are music to my ears. I consider Usyk not just a decent man, but also a man of his word. So I’m in business. But no, that doesn’t mean I’m already eyeing Robert’s back. Glad that Usyk will be in the arena during our fight. His offer is like a blessing to me. Yes, he blesses me with a title attempt. Just like I previously blessed many with a title shot during my division reign. It’s an incredible feeling.”

Wilder wants to sort things out with Helenius first, and “then we’ll see what happens. To be honest, I have a lot of options. But to tell the truth, when you are given the opportunity to fight for the title, then you immediately agree, discarding all other offers.

And Wilder adequately responded to promoter Eddie Hearn (Matchroom Boxing), who believes that Deontay will not win a round against Usyk: “This is normal. Everyone has their own opinion. And I can’t make him shut up. But it is possible that he says this only for the reason that Usyk recently beat his fighter Anthony Joshua twice in a row.

Previously, the legendary Andre Ward also laughed at the words of Hearn. And yesterday, Usyk said that “he only has 3 fights left.”