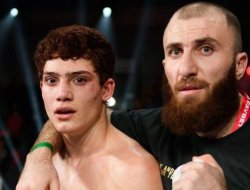 MOSiR Hall, Lublin, Poland. As part of the show, the young Ukrainian welterweight prospect (up to 66.7 kg) Vasily Chebotar (12-0, 4 KOs) performed – he beat the seasoned journiman from the Czech Republic
Miroslava Serbana (13-12, 7 KOs).

The underdog occupied the center of the ring, tried to impose power boxing. Left-hander Chebotar traditionally worked as the second number, moved a lot, punched well in the body. At times, the Ukrainian was fond of playing for the public, and made many mistakes in defense.

In the second half of the fight, Chebotar moved less, invested more in punches. The fighters alternately exchanged series. The Ukrainian added uppercuts to his arsenal, smashed his opponent’s face, worked more accurately. But Serban also responded with good attacks. Since Vasily’s block is frankly unimportant, he looked more powerful.

Chebotar worked in a rush. After the end of the 6th round, he suggested that the opponent move after the gong to the music. Apparently, the Ukrainian decided that the fight was a 6-round one. No, you have to run for another 6 minutes. In the next round, the favorite began to work for the camera: he took a place in the corner of the ring, invited the underdog. He refused.