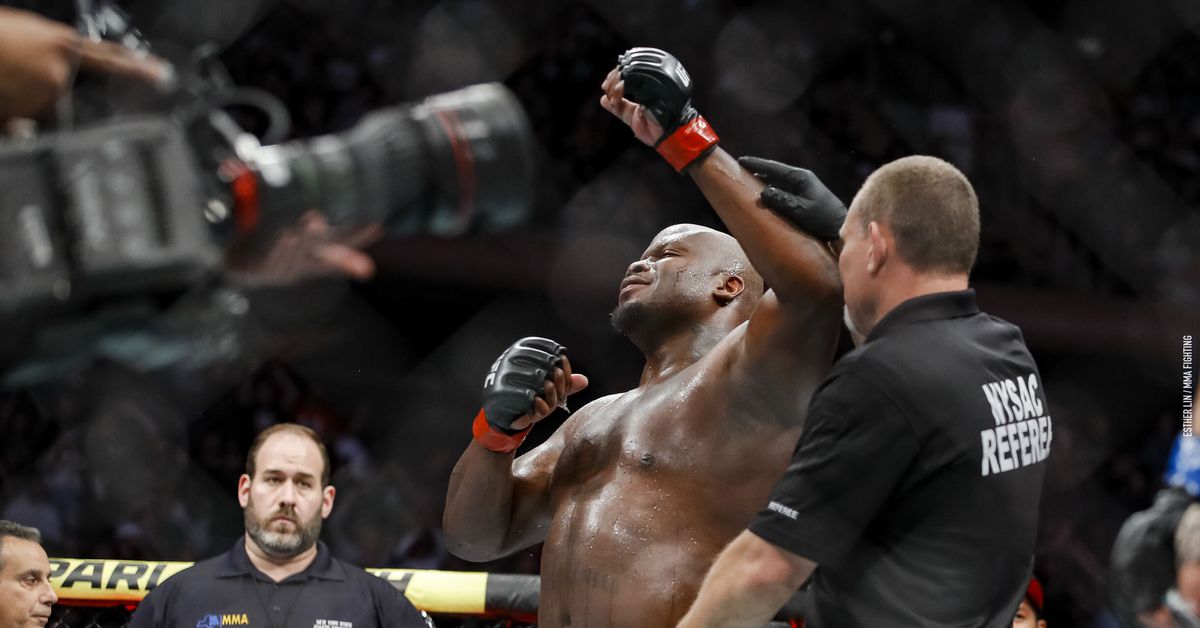 Derrick Lewis has made a career out of defending his turf. The fortifications have begun to fall.

Counting out “The Black Beast” is never wise, but the reality is that Lewis has been on a sustained slump and the competition is starting to catch up to him. Lewis turns 38 in February and all of the swangin’ and bangin’ in the world can’t overcome Father Time (even in the glacial heavyweight division).

The next man to take a swipe at Lewis’ spot — currently No. 7 at heavyweight in the MMA Fighting Global Rankings — is Serghei Spivac, a Russian fight finisher on a 5-1 run. On paper, Spivac is exactly the kind of up-and-comer that Lewis would foil in the past, so the result of Saturday’s UFC Vegas 65 main event will tell us a lot about how much longer Lewis can hang with the best of the UFC’s big boy division.

True, Derrick Lewis has had a bad record, but lets consider what type of fighters we need to defeat Lewis :

That’s the summation of Lewis’ past five losses. I can comfortably state that Spivac doesn’t fall into any of those categories (actually, he might be Daniel Cormier in disguise, can’t rule that one out).

Spivac, a skilled wrestler and a great ground worker is what he is. He knows how to take the fight there, work for advantageous positions, and do damage. His only interest should be in the footwork, and his goal should not be to play around with Lewis.

But one thing Lewis excels at is getting up. Lewis doesn’t give a damn about how much you have to do with your level changes or double legs. He also doesn’t pay much attention to your ground-and-pound and your jiu jitsu. In his mind, escaping a precarious grappling situation is as simple as hauling his 260-pound-plus frame off of the canvas.

Unless Spivac has another path to victory I’m unaware of, he’s eventually going to run out of options, especially in five-round fight, and he’ll have to spend some time with Lewis on the feet. Once that happens, it’s lights out for Spivac.

We saw a kinder, gentler Ion Cutelaba at Friday’s staredowns and I’m not sure what to make of it. Maybe this positive approach will allow Cutelaba to unlock his cerebral side and help him improve. Or maybe he’s just playing possum, charming Kennedy Nzechukwu before harming him in the cage? And maybe it doesn’t matter because Nzechukwu has the skills to beat him.

Predicting Cutelaba fights is never easy. He has done the right thing in his two previous fights and he went to his wrestling when it was needed, but in both cases he lost. That said, Nzechukwu is yet to show that he has much of a submission game, so perhaps Cutelaba can go to his best skill with confidence here.

Cutelaba could also just throw caution to the wind and trade shots with Nzechukwu, but he’ll have to be wary of Nzechukwu’s own offensive wrestling prowess. As I said, this is a tricky one to call. When that’s the case, I’m picking chaos every time, and when it comes to chaos, few in the 205-pound division can manufacture it like Cutelaba.

Waldo Cortes-Acosta didn’t deliver a finish in his UFC debut, but he’s getting another main card opportunity for his second UFC appearance and this time I expect him to get the job done. What we did see in the Dominican’s UFC debut was the aggressive, high-output style that he’s utilized to put together an 8-0 start to his career.

Chase Sherman can be a wild card, so he’s definitely a threat to catch an unsuspecting Cortes-Acosta during a brawl. If the less experienced fighter is not too keen to score a knockout, he could also lure Cortes Acosta into an impromptu brawl. Cortes-Acosta has only one way to fight, and that is forward, forward forward. Sherman might surprise him by offering a counter.

I like the UFC’s Heavyweight Division. Until Sherman or Jared Vanderaa are able to match Sherman with their technical strikes, Cortes-Acosta is my choice.

Muslim Salikhov’s striking is a pleasure to watch when he finds the range, but I have serious questions about how he’s going to handle Andre Fialho’s pressure game. In his UFC appearances, the former PFL fighter established himself to be one of the most active and aggressive strikers within the welterweight division. This could cause problems for Salikhov.

Salikhov uses Fialho’s aggressiveness to pick him apart and gives him three rounds. This is a winning strategy that has been a success for him throughout his career. The 38-year-old also loves to throw spinning strikes and a few good kicks to the body could go a long way towards deterring Fialho’s advances. You have to be able to fight like Salikhov and his loss to Li Jingliang was a reminder of that. You can’t overlook the fact that Salikhov is stepping into the octagon Saturday with an opponent 10 years his junior.

Experience is always a plus, but Fialho has both experience and youth on his side, so I favor him to bounce back from a slow start, outlast Salikhov, and finish him in the final round.

This is quality matchmaking if the UFC is invested in Jack Della Maddalena. Danny Roberts, a veteran opponent can punch and present many problems on his feet. This is the right step up for Della Maddalena after making short of his first two UFC opponents.

It’s hard to deny Della Maddalena’s power. The Australian is more than just a skilled fighter. He has incredible power and should be feared as one of the top welterweight finishers. Roberts can defend well, but has been on the wrong side of viral clips more times than once. It will be fascinating to see if Della Maddalena can cut off the cage and find a home for his bomb left, while Roberts works to counter and pick him apart with solid movement.

We’ll be able to gauge where Della Maddalena is as a prospect, win or not. Roberts will not go down easily. But, if he does it, it will result in Della Maddalena giving him a tough shot and taking him down.