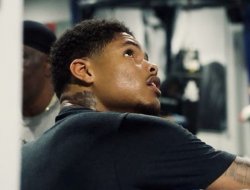 Former world champion Shakur Stevenson will not hold a grudge against Vasily Lomachenko if he does not choose him as the next opponent in the event of a successful comeback at the end of October, but decides to fight the winner of the rematch between the undisputed lightweight champion Devin Haney and George Kambosos.

“In the end, Lomachenko wants [вернуть себе] belts,” Stevenson said on the DAZN talk show. “His thoughts are not really focused on me. So don’t blame me if they don’t negotiate with us and go down the path to Haney.”

Shakur believes that “that would probably make more sense for Loma”.

“So I’ll just sit down, lean back in my chair, wait and stay ready when the time comes [встречи]’ said the American.

Stevenson reveals who he wants to make his lightweight debut with

Stevenson moves up to lightweight after losing the WBC and WBO titles ahead of his last fight against Robson Conceição after failing to fit into the 59kg limit. We’ve previously talked about what’s in store for lightweight with Shakur’s move.

Recall that initially Lomachenko was supposed to fight Kambosos in the summer, but after the invasion of fascist Russia in Ukraine, Vasily decided to suspend his boxing career, and then decided to still enter the ring on October 29. On this day, he will meet Jemaine Ortiz in New York (USA).

“I will fight Lomachenko!” Stevenson’s statement after defeating Conceição