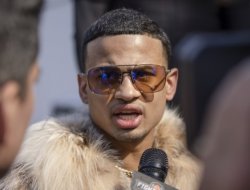 In May 2022, American lightweight Rolando Romero (14-1, 12 KOs) fought on PPV with star compatriot Gervonta Davis (27-0, 25 KOs). After an unsuccessful attempt to take away the WBA World belt from the opponent, “Rolly” for some reason decided that he had turned into a PPV star in an instant – some kind of solid financial offer was waiting.

About his plans he
told like this: “I’m not busy with anything, I’m just hanging out, relaxing. There is no date. I want a rematch with “Tank” Davis. But he, of course, will not offer it to me. And if so, then he went fuck **. Yeah, this motherfucker is the lucky one. I plan to return to the second featherweight. I’m sure it won’t be a problem.”

Romero was asked about two potential top bouts between his countrymen: a bout between punchers Davis and Ryan Garcia, and a bout for the undisputed welterweight title between Terence Crawford and Errol Spence.

Rolly’s response: “There will never be a fight between Davis and Garcia. And frankly, I don’t give a fuck about them. I don’t even want to talk about it. What do I care? Spence? I would have fought him myself and even tried to do it. But he says he doesn’t fucking need it. Chat with Spence? No, I don’t like that.”

Romero is still determined to have a fight with Spence in the future, because he also performs on PPV: “I will get to him after he beats Crawford. What do I think of this potential fight? That it will be a fucking boring and dull sight. Fuck, what else can you expect from a fight between two southpaws? I think Spence will kick Crawford’s ass. And then Rolly kicks Spence’s ass.”

In October, rumors spread that Romero allegedly wanted a fight with “Pitbull” Cruz. Remember when Rahman threatened YouTuber Paul with a knockout in July? It turns out that he managed to challenge the “Rollie” as well.