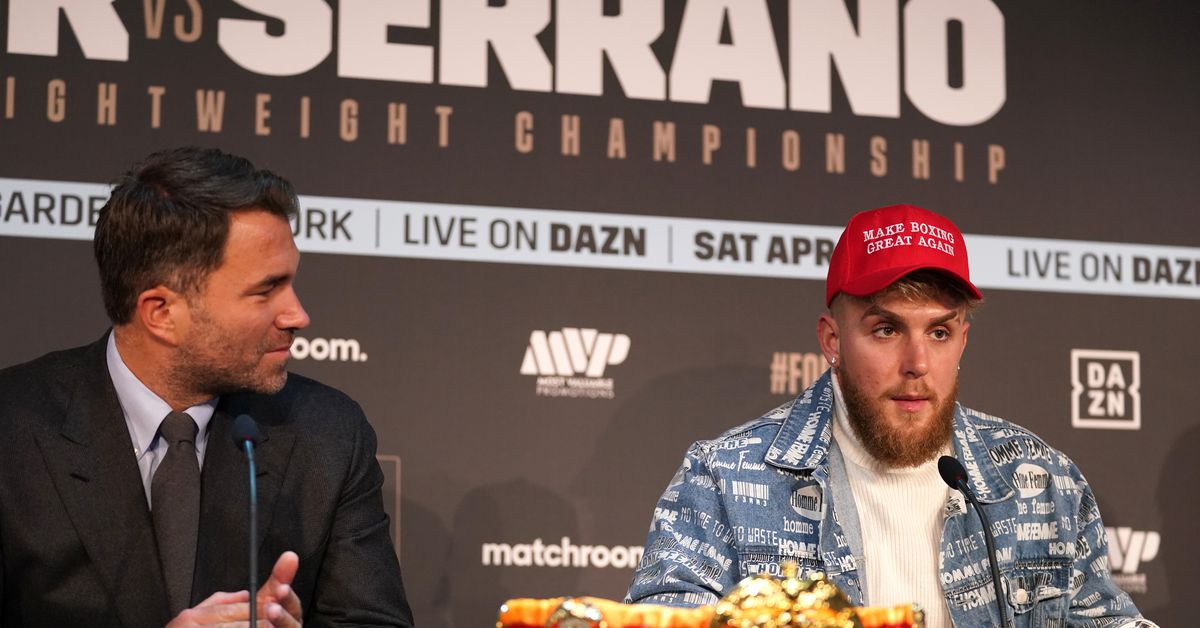 Eddie Hearn has a potentially expensive reminder for Jake Paul to watch what he says.

TMZ reported that Hearn filed a lawsuit on Friday, accusing Paul of defamation following Paul’s recent comments claiming that judge Glenn Feldman “is getting paid money” to score bouts in favor of Hearn’s fighters, namely Katie Taylor and Anthony Joshua. The Matchroom Boxing promoter threatened legal action earlier this week and is now suing Paul to the tune of over $100 million in damages according to Hearn’s attorney, Frank Salzano.

“Both legally and ethically there is a clear line separating opinion from defamatory lies,” Salzano told TMZ. “Jake Paul knows that, and he purposely crossed that line when he wrongly accused Matchroom Boxing and Eddie Hearn of fixing fights.”

“Nonetheless he was still given an opportunity to retract his defamatory statements and refused to. Now he will face the legal consequences of his actions as Matchroom and Mr. Hearn will be seeking damages in well excess of $100 million given the value and goodwill attached to the Matchroom business and the harmful nature of Mr. Paul’s comments.”

Hearn and Paul worked together amicably to promote the bout between Matchroom’s Taylor and Most Valuable Promotions’ Amanda Serrano this past April, but cracks in their relationship began to show in May when Hearn referred to the YouTuber-turned-boxer as an “average fighter” during an appearance on The MMA Hour and Paul fired back on social media saying, “Eddie Hearn, f*** you, you can suck my d***.”

Paul’s fight-fixing comments stem from Serrano losing a close split decision to Taylor, with Feldman scoring the bout 97-93 in Taylor’s favor. Judge Guido Cavalleri also scored it for Taylor, 96-94, while judge Benoit Roussel had it 96-94 for Serrano. The wide margin on Feldman’s scorecard is what sparked Paul’s ire.

Regarding Joshua, the British heavyweight lost a split decision in his championship rematch with Usyk this past August, with Feldman scoring the bout for Joshua 115-113 (the other scores were 116-112 and 115-113 for Usyk).

According to a document obtained by ESPN, Hearn’s complaint includes public comments made by the promoter in which he personally scored the bout for Usyk and acknowledged that the Taylor-Serrano bout was closely contested. Salzano also points out that the judges were not determined by Matchroom Boxing, but instead assigned by commissions in New York for the Taylor-Serrano fight and the Middle East for the Usyk-Joshua rematch.

“[Paul’s] defamatory statements were made with malicious intent and have caused financial and reputational harm to [Hearn and Matchroom], which is precisely what [Paul] intended when he made the outlandish accusations,” Salzano wrote.

See Paul’s inciting comments from his interview with IFL TV below:

“I still think Amanda Serrano won the fight [over Katie Taylor]. Then you see how this judge Glenn Feldman, who had the biggest gap between Taylor and Serrano. Everyone pretty much had it a draw… a draw or that Amanda won. But there’s this judge, Glenn Feldman, who scored it such a big gap for Taylor, gave rounds that Amanda clearly won, to Taylor.

“Then this judge, Glenn Feldman, shows up in Saudi and scores Anthony Joshua to win [over Oleksandr Usyk]. Everyone who watched the fight [knows] it’s not a split decision. Usyk had a runaway victory, clearly won the fight. This judge, Glenn Feldman, gives it to Anthony Joshua? It’s like a repeated crime here. This type of s***, I’m going to call it out here in boxing because it’s bulls***. Clearly, this guy is getting paid money by Matchroom Boxing.”