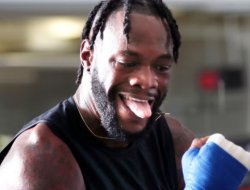 Former world heavyweight champion American Deontay Wilder (42-2-1, 41 KOs) has no doubt that before hanging up his gloves, he will certainly cross in the ring with another former British champion Anthony Joshua (24-3, 22 KOs) and convinced that their fight hasn’t gotten any smaller since they were both at the top.

“I’m still in business, and so is Joshua,” Deontay said. “People always ask me, “When are you going to fight Joshua?” Our fight is still the biggest fight in the world, so it’s not a question of “if” but “when”.

Recall that on October 15, Wilder returns after a year of inactivity and two early defeats in a row from Tyson Fury. In the main event of the boxing evening in Brooklyn (USA), he will hold the semi-finals of the WBC Candidates Tournament against Robert Helenius from Finland. If successful, Deontay will have to face Andy Ruiz Jr. in the final eliminator.

Joshua also suffered two defeats in a row from one opponent – Oleksandr Usyk. But he is not going to stand idle for a long time, and already on December 17 he should again enter the ring against an opponent that has not yet been announced.