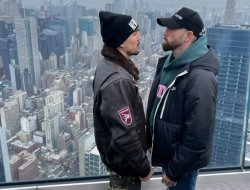 Initially, Lopez was supposed to fight with the conqueror of two weight categories, Puerto Rican Jose Pedraza, but he refused the fight for health reasons.

Martin accepted the fight 3 weeks before entering the ring. And now he blames Lopez for this: “Only 3 weeks to prepare! So that’s how you deal with your opponents – you give them only 3 weeks! Under such conditions, only the most desperate and crazy fighters will take the fight. Such as me. I believe that I will still beat you. Are you nervous, Theo? Absolutely not? We’ll find out on Saturday…

Lopez responded to the accusations of the opponent: “We immediately wanted Martin. So glad it turned out the way it did. And do not listen to the fact that he allegedly only had 3 weeks to prepare. We know that he was in the hall and prepared diligently. So do not expect any underestimation. This is a great fight that will show what I’m good at at this weight. The point is not just to win. It’s important to make it bright. Knockout? If he comes, he will come.”

The winner of this fight will be a contender to fight the WBC champion American Regis Prograis, who took the vacant title with style and confidence in the confrontation with the American-Mexican José Cepeda. Prograis will have two mandatory defenses in a row. First, he will box with former unified world champion Jose Ramirez from the USA.

Have you seen the boring statements of Teofimo Lopez and Sandor Martin? Keep Prograis’ opinion of this eliminator better.