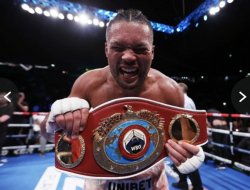 Allegedly, the fight is tentatively scheduled for February and will take place in Britain. According to rumors, Joyce’s team is actively looking for lefty opponents. Zhilei is their priority target.

The Briton is the interim WBO champion. He is aimed at fights with the current holders of full-fledged titles – Ukrainian Oleksandr Usyk and compatriot Tyson Fury. Apparently, it is for this reason that Joyce is looking for a left-hander (Usyk is left-handed, Fury is right-handed, who often changes his stance during the fight).

Joyce is the silver medalist at the 2016 Olympic Games (Rio de Janeiro), and Zhilei was second at the home Olympics (Beijing 2008).

In the last fight held, the Briton knocked out the former world champion of New Zealand Joseph Parker and became the owner of the interim WBO title. And Chzhilei in the IBF eliminator was thinly defeated by Croatian Filip Hrgovic, dropping his opponent in the course of the swing.

In 2013, Usyk defeated Joyce in the semi-professional WSB league. The Briton admitted that he was not ready for that fight, as he had never boxed with a southpaw before.

Fury recently said that if not Usyk, then he would fight Joyce. Meanwhile, Coach Joe believes he has found the key to defeating Usyk. Here he is.