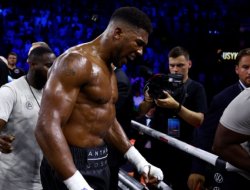 Former unified heavyweight champion Briton Anthony Joshua (24-3, 22 KOs) recently decided not to rush to return to the ring. After two consecutive defeats to Ukrainian Alexander Usik (20-0, 13 KOs), the ex-heavyweight leader wanted to fight in December, but decided to postpone the comeback to the beginning of next year.

Allegedly, they are now demanding to quickly organize some really cool event in Britain, because Hearn has been losing ground there lately. And all this against the background of the activation of the main competitors – Frank Warren (queensberry promotions) and Benjamin Shalom (boxer).

“Perhaps Joshua will return to the ring in January or February,”
tells Hearn. – Names? To be honest, he wants to fight Dillian Whyte. Yes, he’s still busy. He has a duel with Jermain Franklin on November 26th. Let’s see how this fight ends. But for now, I would call White the favorite for the fight with Joshua. Unless, of course, he passes the nearest opponent. Who else? Otto Wallin contacted us more than once. I think it’s a good fight too.”

On a possible fight between Joshua and former world champion American Deontay Wilder (43-2-1, 42 KOs): “Let me comment on this whole situation. Yes, we are interested in this fight. But no, this fight will not take place in January or February. I wouldn’t call Joshua’s next opponent an interim fight. After all, we are looking for only eminent fighters and difficult challenges. I don’t think Anthony is ready to lower his level of opposition and pick opponents outside of the top 10 or top 15. I’m sure he needs a real fight. A real fight, not all of this.”

About the fight that never took place with WBC champion compatriot Tyson Fury (32-0-1, 23 KOs): “Am I glad that the fight did not take place? No, because I was made the main culprit for the fact that the negotiations ended in nothing. But I immediately said that the time and place were chosen poorly. What to say now? We have what we have.”

Promoter Warren is confident that Joyce and Dubois will knock Joshua out, and anyone will knock him down. And here is what Fury says: “Usyk beat the“ bodybuilder ”, and you immediately called him“ killer ””.