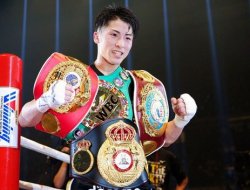 The World Boxing Organization (WBO) Championship Committee has officially appointed the Japanese Naoya Inoue (24-0.21 KOs) as their “super champion” in the bantamweight (up to 53.5 kg). The formal procedure was carried out in connection with Naoya’s winning the title of absolute division champion – on December 13 in Tokyo, he won a unification fight against Briton Paul Butler, knocking him out in the 11th round. After that, Inoue had all the prestigious titles – WBC, WBA, IBF and WBO.

The new status of the Japanese “Monster” could easily be bypassed without giving it a news value, if not for one “but”. The prefix “super” allows Naoe to immediately become the official contender for the title of the organization in the second bantamweight (55.3 kg), the transition to which the boxer has already announced.

Note that at the moment the WBO title in 55.3 kg belongs to the American Stephen Fulton (21-0, 8 KOs) – one of the few who, according to experts, is able to defeat Inoue in the surrounding divisions.

True, earlier the WBC appointed a rematch between Fulton and Brandon Figueroa for the vacant featherweight title (up to 57.2 kg). That, however, does not prevent the American, who in the past year was marked by only one fight held, to speak disparagingly about the Japanese: “Take a blow from him – and what will be left?”