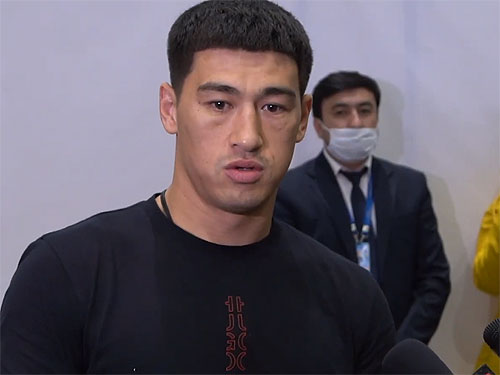 Having successfully defended the WBA Super light heavyweight title (up to 79.4 kg) in a fight against the absolute champion of the second middleweight (up to 76.2 kg) Mexican Canelo Alvarez (57-2-2, 39 KOs), Russian Dmitry Bivol (20- 0, 11 KOs) returned to Russia, where he gave
interview representatives of the local media.

In a conversation, Dmitry spoke about the last fight against the pound-for-pound leader, told about what inspired him to win, compared the last fight in terms of difficulty with other fights in his career, named four components of the victory and described the reaction of the fans.

“To be honest, I did not expect such a meeting. Usually I am met by those closest to me, my family, but here it was pleasant, of course, they met me.

“In general, every victory is important, but this one is especially important. Because when “Pound-for-pound King”, as they call it, comes out against you, then you need to tune in, all the fans are against you. I think this victory is important for a lot of people who are in some small group that they don’t believe in, but they come out and do something. Apsets – they always inspire. Usyk’s last victory over Joshua must have inspired me. When a man came to England, everyone did not bet on him, but he won.

“Firstly, I was motivated by the fact that if you remove all these camera flashes, all the media, your opponent, and just accept him as a boxer and look at his qualities, then I see that I can be better than him in my qualities. If I pull myself together, I can win. Of course, there was a lot of motivation there.”

“I can’t say that it was the most difficult, but the whole atmosphere itself, of course, yes, it was difficult. I had more difficult fights – with Barrera, when I had a cut. I experienced the whole fight there, that I have a cut, a bump.

“About plans? Yes, in fact, we have plans to rest now, and then we’ll see how everything turns out.

“Well, in general, the three components of any victory. It’s to love what you do, then work hard. But just working hard is also not enough, you need to work right, in the right direction. Well, four is to believe in yourself. Probably four main components.

“I was initially determined that I would be without a flag, because the rules are now. We almost had the fight cancelled. And I’m glad I was allowed to box at all.”

Why did Canelo lose to Bivol? Oscar De La Hoya has a sudden answer

“Before the fight, I didn’t really worry, because this is a fight of such a scale that the main thing is that people see what happened. This is not an Olympic sport, where you were robbed and that’s it, and you were left without medals for the rest of your life. Here people saw it, they will always remember it. So I didn’t worry too much before the fight.”

“People congratulate me, write words of congratulations, it’s nice for everyone who was sick. People write that “I knew it.” Most knew it all [смеётся]”.

“I was happy before that. I am happy even now. I am generally a happy person. My happiness is not measured, probably in victories. Victories bring me joy, some kind of pride. My happiness lies in something else.”

“The audience accepted it, and no one was outraged. They congratulated. Many Mexicans then shook hands, said that now they had a new favorite boxer, another one. Canelo’s team – they accepted defeat with dignity.”