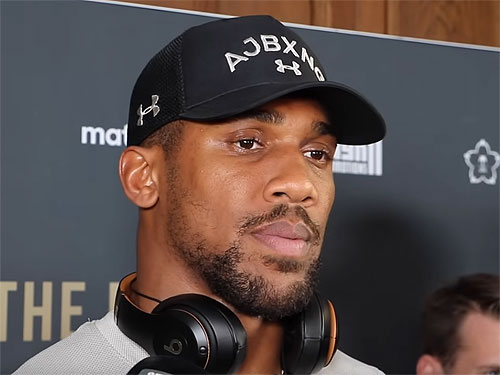 Former unified heavyweight champion (over 90.7 kg) from Great Britain Anthony Joshua (24-2, 22 KOs) answered questions from representatives of the British media after holding a press conference for a rematch with his offender from Ukraine Oleksandr Usyk (19-0, 13 KO), which is scheduled for August 20 in Saudi Arabia.

AJ
told about the pressure from the defeat of Usyk last September, expressed his wishes to Oleksandr and all Ukrainians in connection with the military attack of Putin’s Russia, spoke about working with coaches Robert Garcia and Angel Fernandez, and also gave an answer to the proposal of the WBC title holder British Tyson Fury (32- 0-1, 23 KOs).

– You were in this position before when you returned after defeat to Andy Ruiz. Is your mood the same as after the fight with Ruiz?

– To a certain extent. I need to go back again, do more than I did the first time, and do something different. Yes, I have been in this position before.

You always seem calm when under pressure. Even today. A lot is at stake in this duel for you. Do you feel any pressure or anything like that?

– What did you take from the last fight to the next one?

— I was watching you before you went to the press conference. I saw how you looked around, looked at the screen with the videos of the previous fight. I’m sure there is nothing new for you. You studied and analyzed it more than once, but after you finished watching, you started shadow boxing a little. What comes to your mind when you watch a cut video?

– Adrenaline kicks in. Reality starts hitting you. This is what we are aiming for. I was at the training camp. Therefore, this is the first time, apart from Saudi Arabia, that we have left the training camp. It opens your eyes to what we’re really preparing for.

— How do you find a connection with Robert Garcia at the moment?

How is Angel Fernandez working with Robert Garcia?

“Let Angel decide who to work with. Because he needs to be comfortable. They have the same philosophy, the same mindset.

– The situation in Ukraine may affect Usyk. How do you think it will affect?

I think he deserves all the support he can get. People in Ukraine deserve all the support they can get. I told him the same. I wish him, his family, his countrymen all the best, because I don’t wish this kind of thing on any civilian. I mean – to find yourself inside the war.

— Eddie Hearn said that There have been many positive developments in Saudi Arabia since you fought there for the first time. Do you think so too?

– You know what? In terms of statistics, boxing has grown by 300%, which is solid. Secondly, more than 40 halls are open. They just held the women’s championship, which is also great for them.

“That’s what we’re bringing. I don’t want to talk about my legacy. But yes, that’s what it’s all about. People also benefit from our success.

Yes, it’s hard, I accepted defeat and everything, but I remain calm. Yes, of course, I feel pressure on myself, but I know that many good things come from my suffering, from my defeats. We are returning to Saudi Arabia to strengthen boxing again. I am sure that a generation will come out of this that will fight in Saudi Arabia and America sometime in the future.

What do you think about Tyson Fury’s offer to coach you?

— I respect it, but he is not a coach. He’s just a knowledgeable person when it comes to boxing.

Fury volunteered to prepare Joshua for a rematch with Usyk. Opinion of Robert Garcia