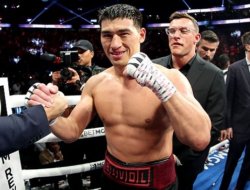 Promoter Eddie HearnMatchroom Boxing) claims that the next opponent of the WBA Super light heavyweight champion Russian Dmitry Bivol (21-0, 11 KOs) is still unknown. And it’s not even entirely clear when a fighter from the top 10 P4P rating will return to the ring.

“Yes, I myself am interested,” says the promoter. – After all, it is already known that Canelo Alvarez will first have an intermediate fight in May, and will fight Bivol only in September. It turns out that everything goes to the fight against Artur Beterbiev for the title of absolute world champion, but he first has a mandatory defense against Anthony Yarde, and then he will be unavailable due to Ramadan. And I don’t know when he will be able to fight Bivol. It looks like we will have to clarify all the points first, and only then plan something.”

Hearn suggested that Bivol would want to defend the belt in the first half of next year so as not to sit idle: “If you remember, we planned to fight him with Joshua Buatsi, but then the WBA sanctioned an immediate defense with Gilberto Ramirez. So it is possible that we will return to this option. Not only do we have Buatsi, but we also have Callum Smith. To be honest, they are both marking time in anticipation of something bigger – a fight for the title. And this is not easy to do, because there are only two world champions in the division – Bivol and Beterbiev.

In the meantime, rumors have been circulating that Canelo is allegedly pushing for a catchweight rematch with Bivol. Mexican response. Recently, a famous American coach said that Bivol would beat Alvarez in a rematch.