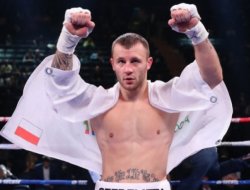 MOSiR Hall, Lublin, Poland. In the middleweight limit (up to 72.6 kg), local ex-challenger Kamil Sheremeta (23-2-1, 7 KOs), who was annihilated in 2020 by the legendary Gennady Golovkin from Kazakhstan, beat the journiman from Ukraine
Vladislav Gelu (12-5, 7 KOs).

Underdog started the fight aggressively. He grabbed Sheremeta and angrily tapped the favorite on the back of the head. The referee suspended the fight, scolded the bully. He seemed to understand everything.

The favorite looked indistinct, did not force events. But it was he who got the best kick of the starting three-minute period – he met it well with a left hook. The fight did not immediately work out – there was much more wrestling than boxing.

From the second round, Sheremeta took over the initiative. He slowly began to crush his opponent. He rushed into unprepared attacks, fell behind the blows, but for some reason the favorite did not succeed in catching him on this. In the 3rd round, the referee had already reprimanded Sheremeta – he broke and dropped Gela.

In the 6th round, the fighters unsuccessfully clashed heads. The Pole had a cut on the back of his head. Tin. Everything is in the blood. In response, Sheremeta began to box more aggressively, began to invest in punches, moved well, disturbed with twos, hooks to the body, and uppercuts. The Ukrainian was breathing heavily, sometimes losing his mouth guard.

The final round did not take place. Nobody understood the reason. Gela is very dissatisfied. Apparently, the referee decided so.