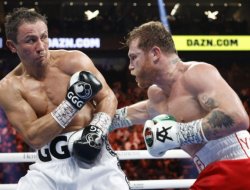 40-year-old boxing legend Gennady Golovkin (42-2-1, 37 KOs) from Kazakhstan closed the trilogy with the Mexican Saul Alvarez (58-2-2, 39 KOs) with a defeat in which, perhaps, both boxers were disappointed.

Despite the setback, Golovkin remained the champion: he fought for the title of absolute super middleweight without risking the WBA Super / IBF belts a division lower.

The veteran’s ex-coach Abel Sanchez believes that at this stage of his career Golovkin does not need fights with the world’s top middleweights – Americans Jermall Charlo (32-0, 22 KOs) and Demetrius Andred (31-0, 19 KOs). At least not
now: “Wait, are you suggesting that he go to the top fighter immediately after the fight with the top? Don’t you think this is too crazy an idea? Maybe first let the tops meet each other and determine Golovkin’s opponent in a face-to-face fight? He didn’t need to fight Charlo or Andred right now. It’s the same with Canelo – he doesn’t have to fight the top guys all the time.”

“The fans are asking? Sanchez perked up. Understand that boxing is a business. This is the reason why tops don’t fight tops all the time. Otherwise, there would be no stars in this sport. Fans want… Fans don’t go into the ring. Fighters like Canelo or Golovkin choose not the most dangerous opponents, but those who will bring benefits. Therefore, “fans are asking” is not an argument at all. They will still watch fights. They will still pay. They’ll fuck up the fight but they’ll buy it Fighters just need to stay active. And only in this I stand in solidarity with the fans.”

Meanwhile, the WBA ordered Golovkin to fight Lara. AT
DAZN reported that over 1 million PPV were sold for the duel with Canelo.

How will the talks on Usyk-Fury fight go? Bob Arum’s opinion