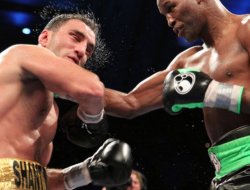 Prime Hall Complex, Yerevan, Armenia. In the main event of the show, a native of Armenia, a native of Armenia, an age-old light heavyweight (up to 79.4 kg) and a former challenger Karo Murat (35-4-1, 24 KOs), who previously played for Germany, knocked out the Polish gatekeeper in the 10th round
Norbert Dabrowski (24-11-2, 11 KOs).

Murat, back in 2013, tried to take the IBF belt from the legendary American veteran Bernard Hopkins, but lost to the “super grandfather” by the decision of the judges. In 2018, he kind of hung up his gloves, but this year he decided to return.

The battle of veterans surprisingly turned out just a feast for the eyes. The left-handed underdog moved well, and Murat’s pressure failed solidly – he often had to take pauses to recover.

In the decisive 10th round, Karo, driven by the fans, drove Dabrowski to the ropes, heaped blows. He decided to play it safe and took his knee.

The fight continued, and Murat ran to finish off – he sent the opponent to the canvas, after which he himself sprawled in his corner. It was lucky that this time the Pole refused to continue the battle. A real movie episode.