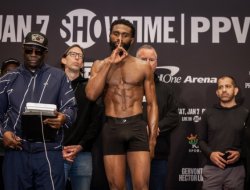 The local favorite does not hide the fact that his goal is to fight for a full-fledged belt with compatriot Errol Spence (28-0, 22 KOs).

Coach Kenny Porter
thinksthat you should not talk about this fight and name the favorite: “I tell you, Spence will not fight this guy. He’s not going to. Everything is simple. Errol is on another level now. He has a choice, and Jaron doesn’t have one yet. So don’t expect them to fight. This will not happen. Although I would bet on Ennis…”

Father Porter thinks Ennis is worth all the hype: “I bought it all. But that doesn’t mean I’ve seen everything. Do you know what it looks like? Imagine that you have bought a new sports car. It looks cool in the cabin, you liked it behind the wheel, convenient controls, everything seems to be cool. But you know what? You will never understand anything until you ride it on the freeway. It’s the same with Ennis. I bought into all this hype, but I still want to see him on another level – I want to see how he squeezes the gas pedal all the way.

Yesterday, Ennis announced his goal in boxing – he was not to be insolent. Have you already seen what he and Chukhadzhyan talked about at the final press conference? There are quotes. At the beginning of the week, Jaron beautifully pushed about the duel with Spence. Lomachenko would appreciate it.