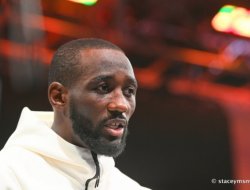 It is interesting that Ennis himself
comparisons dislike: “There is no resemblance between us. Don’t get me wrong, Crawford is good. But we are completely different. And our styles are completely different. I am more fluid and agile, and my punches are much harder. And not only this. I consider him a tough fighter, but I feel that I am better in literally everything.

Is Crawford the current P4P leader? Ennis is unsure: “I think there are a lot of contenders for the lead. There is a smaller Charlo, there is Shakur, there is Canelo, there is Bivol. There are a lot of applicants. It seems to me that it is impossible to choose from all one fighter. If you still need to make a choice, then perhaps this is Canelo. After all, he is the only one who fights with everyone and in different weight categories.

Ennis is forced to wait for his title shot as reigning welterweight leaders Crawford and Errol Spence try to negotiate a head-to-head bout with all the division’s belts on the line. The applicant does not hide the fact that he is also interested in all the titles: “Yes, this is my goal. I don’t think it’s fair that I have to wait so long. I would have acted differently. I would have collected all the belts, had a couple of defenses, and then I would have met with some young hungry lion. Why do I need it? It’s a real old school. I think we need to bring this back to boxing – to make sure that the strongest do not avoid each other.

Ennis is not happy that sometimes the path to the title has to be punched not with the help of fists, but thanks to the ability to present oneself well on camera: “Well, trash talk also does not guarantee a title fight. The champion can even say to this: “He talks too much and does not respect me, so he will not get a fight.” Therefore, I will first take the “temporary” title, and then I will collect all the others.”

On Spence vs. Crawford: “The odds are about 50/50. If you choose a favorite, then it definitely should be Spence. He’s been at this weight longer, he’s got more belts, he’s better tested, he’s had tougher opponents. This does not mean that he will definitely beat Crawford. I really don’t know who will win. But if I have to choose, I will choose him. Terence? He rarely fights. This is a minus. But when he’s in the ring, he always looks good. That’s a plus.”

On January 7, Ennis will fight for the vacant IBF interim title with Ukrainian Karen Chukhadzhyan. Jaron doesn’t know if he can knock out his opponent. A little earlier, the favorite admitted that he wanted another opponent.