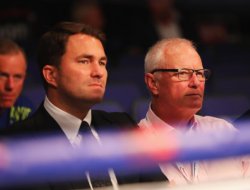 Founder Matchroom Boxing Barry Hearn opened up and talked about how he instilled in his son Eddie a love of sports.

By
words Barry, it wasn’t difficult – they were always rivals: “We used to play cricket a lot. And I didn’t give in to him. Despite the fact that at one time I was cool in bowling, he beat me in this sport, although he was still a very green youth. And then I decided that if I want to make a real man out of him, who should fully feel the spirit of the sport, then something more is needed. When he was still a schoolboy, I took him to the gym. To be honest, I assumed that we would just spar – 3 rounds of 3 minutes. But in the 2nd three-minute period he dropped me twice. So the 3rd round never happened.”

“The funny thing about this story is that we left the hall with mixed feelings. I was very pleased, because on that day I learned a lot about my son. And Eddie was disappointed. No, not because he beat me. He was disappointed that the 3rd round never took place, ”recalls Hearn-father with a smile on his face.

Have you heard that Alexander and Tyson have already agreed on everything? There are details from Bob Arum.