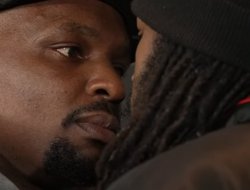 More precisely, the veteran almost grappled, who, unlike the phlegmatic American, was on edge and did not share something with one of the members of the enemy team.

Sturdown proceeded calmly, then Dillian began to say something to his opponent, and waved off someone off-screen. The fighters were quickly pulled aside. Calmly!

This is how it looked:

Franklin is 28 years old. Over the past 2.5 years, he just beat a certain journiman grandfather in five rounds in the spring
Rodney Moore (20-22-2, 9 KOs).

But the 35-year-old White in April in his last fight was knocked out in the 6th round by fellow world champion Tyson Fury.

Their fight is scheduled for the late evening of November 26 at OVO Arena in London (England).

Franklin: “Bull with me? Dead number”