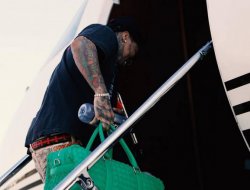 The still “regular” WBA lightweight champion American Gervonta Davis (27-0, 25 KOs), who has been fluctuating between “out!” and “it’s all fakes, I’m not going anywhere!” in terms of ties with Floyd Mayweather’s promotional company, again hinted that not everything was going smoothly in their relationship.

On the evening of November 23,
writes with a screenshot, insider Michael Benson, the puncher got on Twitter and wrote: “When will you all give me the documents on breaking the contract ?!”

At the same time, Floyd, the president of his company, Leonard Ellerbee, and Mayweather Promotions itself were tagged in the post.

The last time Davis talked about leaving and then refuted it, he said that he “still believes that with Mayweather, adviser Al Haymon and my people, I have the coolest team in boxing.”