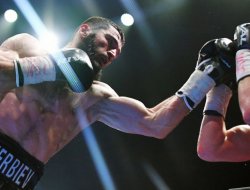 The owner of the WBC, IBF and WBO light heavyweight belts, Russian Artur Beterbiev (18-0, 18 KOs) playing for Canada, will fight his mandatory challenger Briton Anthony Yard (22-2, 21 KOs) in January. It is possible that immediately after that he will be forced to conduct another mandatory defense.

The IBF decided that on November 1, there will be a promotional bidding for the right to organize the final eliminator fight between the age-old ex-champion from Canada Jean Pascal (36-6-1, 20 KOs) and the young German Michael Eifert (11-1, 4 KOs).

Initially, in the selection, Pascal was supposed to fight British prospect Joshua Buatsi, but he refused the fight at the last moment, citing the absence of a doping control clause on the papers – the veteran had previously been caught using illegal drugs.

The IBF offered an eliminator to the next boxer in the ranking. Eifert gave the go-ahead, but it still didn’t work out amicably with Pascal’s team and is unlikely to succeed before the auction.

The fight with the mandatory challenger from IBF Beterbiev was supposed to be held back in 2020, but the pandemic disrupted everything. In May of this year, Pascal sensationally upset the mandatory challenger for this version of the Chinese Fanlong Meng. It is possible that the IBF will remind Beterbiev of his obligations immediately after Pascal and Eifert determine the winner.

The German is a former unified World Youth Champion. His opponents are mostly unknown fighters. With a higher-level opposition, Eifert looks indistinct: two equal fights with Tom Dzemsky (win and loss, both decisions of the majority of the judges), a difficult victory over a certain
Adriano Sperandio.

In 2019, he almost flew on points to a journeyman
Stanislav Ashnerbut the judges insured, fixing the victory by the decision of the majority.

Fans (except for fans of Eifert and Pascal), of course, will not be delighted with this, because unification with Dmitry Bivol is expected from the knockout champion. He, by the way, believes that it will be more difficult with Beterbiev than with Canelo.