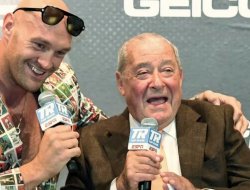 According to Tyson Fury’s co-promoter Bob Arum, Anthony Joshua’s promoter Eddie Hearn is the reason these British heavyweights may never fight. The head of Top Rank believes that by dragging out the negotiation process, his British counterpart supposedly wants to save his ward from another defeat and, accordingly, a drop in his value for the audience. And, accordingly, the fall of their income on AJ.

“Hearn slows everything down,” Arum lamented in an interview.
talkSPORT, – because he does not want the fight to take place. Why doesn’t he want to? It’s because Joshua lost three of his last five fights and Eddie knew he was going to fly again if he fought Fury. Therefore, Hearn is, in fact, an obstacle in the negotiations.”

“Eddie sends a draft and then Frank and George [Уоррены] answer it, and after that we don’t hear from Eddie for several days. He pulls in the hope that everything will “die” by itself, Arum blames the head of Matchroom Boxing. “I don’t think Joshua is involved in this. I think Anthony wants the fight for some reason and I know Tyson wants that fight too. But Eddie doesn’t want to and does everything he can to prevent it.”

“Eddie knows he has a valuable asset in Joshua who will probably lose again and that will make him a lot less valuable. So he tries to prevent it. Even if you put Eddie in a torture chamber, he still won’t agree to the contract. There are no contract issues. If there were any problems, I would notice them, but I don’t see anything like that there, ”said Bob.

Arum ended with advice to Hearn.

“Go, damn it, already to the Warrens, sit down and finalize the contract, and let’s sign it. I don’t blame Fury for being upset with what is happening, ”said the American functionary.

So what’s up with the Fury-Joshua fight? The champion’s father knows the whole truth. The other day, Fury offered Joshua a way to settle all disputes.