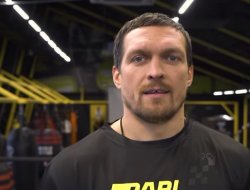 There may be some friction in the negotiations regarding the terms of the contract between the team of Ukrainian and British heavyweight Oleksandr Usyk (20-0, 13 KOs) and Tyson Fury (33-0-1, 24 KOs). Otherwise, why then the first one today wrote (according to reporter Michael Benson with a screen) a post in
Twitter about the adversary’s greed for money?

It is also possible that this is just the promotion of a potential superfight. Here is what they wrote in Usyk’s account on his behalf (it is unlikely that he himself, because it is not in his style).

Further, Alexander’s microblog continues: “You say that I am avoiding you, although I have never avoided you and even came to you. I am ready to box with you even without prize money!”

This message
in Usyk’s profile no.

“You are next!” Usyk recorded a new video for Fury

Of course, no one will ever at this level, especially in a duel for all the major titles – WBC, WBA, IBF and WBO – box for free, and all this is just for the sake of a red word and promotion. Although, if tonight they both said – men, after 3 hours they won’t give money to the ring, just “for greatness”, then Usyk, most likely, would have run there already on the run.

According to the co-promoter of the British, the head of Top Rank Bob Arum, about the place of the fight, Usyk accepted the offer of the Saudis, it’s up to Fury.