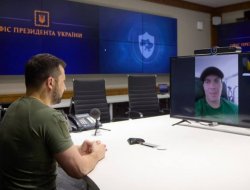 The absolute world champion in cruiserweight, WBO/WBA/IBF champion in heavyweight Oleksandr Usyk (20-0, 13 KOs) became an ambassador of the UNITED24 fundraising platform to help Ukraine, which is fighting against the occupying army of fascist Russia. Boxer Ambassador
introduced President Volodymyr Zelensky.

“Oleksandr has supported Ukraine from the very beginning of the full-scale invasion [РФ]. Now he will help support the Restoration of Ukraine direction,” the head of state said.

According to Zelensky, first of all, Usyk “will focus on the restoration of the Kyiv region, where he is already implementing infrastructure projects.”

What exactly the boxer does and where is still unknown.

Frame of the day. Oleksandr Usyk still flew to the USA

Report on Usyk’s last fight – ZSU. What will happen next is still unknown. In Britain, it is believed that Usyk will vacate the WBO title.