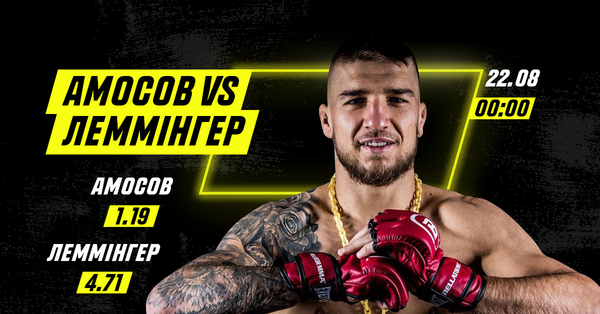 The Ukrainian has no defeats

On the night of Saturday, August 22 (beginning at midnight in Kiev), a series of fights at Bellator 244 will take place in the United States, where the Ukrainian fighter Yaroslav Amosov will meet with the American Mark Lemminger. This will be the 24th fight in Yaroslav’s professional career. The Parimatch brand ambassador won all his previous fights and now the chances for him analysts estimate success at a high 80%.

Amosov has an impressive track record, he is a four-time world champion and a three-time European champion in combat sambo and a world champion in MMA according to GEFC among professionals. If Yaroslav continues to perform as successfully, very soon a title fight will await him.

It should be noted that initially the Ukrainian was supposed to meet with the ex-contender for the UFC title Jon Fitch, but in the end the MMA veteran was replaced by Lemminger. Mark is 5 centimeters taller than Yaroslav, but Amosov has a larger arm span (191 versus 178). The American is a year older, but only had 12 fights, in which he won 11 victories. By the way, the opponents of the fighters were previously of very different levels. Yaroslav met with more experienced opponents.

Amosov has excellent wrestling skills, thanks to which he got 10 victories. (8 – suffocating techniques). In the stand, Yaroslav also looks good, but he never rushes into the wheelhouse, but acts competently and prudently, waiting for the moment to transfer his opponent to the ground.

Mark is also a basic wrestler with a very viscous style. But he cannot be called a diverse fighter. In striking technique, he has nothing to brag about and he, most likely, will try to quickly transfer the fight to canvas. True, it will be difficult for him to surprise a Ukrainian there. But in MMA everything can change at any second, the more interesting it will be to watch the fight.