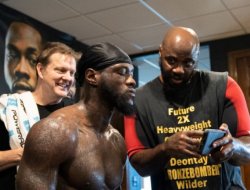 American Malik Scott ended his boxing career in 2016, switching to work as a sparring partner. I visited the camps of the best current heavyweights in the world: Tyson Fury, Oleksandr Usyk, Anthony Joshua and Deontay Wilder. Scott showed himself great in a new role, but later decided that this was not enough for him.

The ex-heavyweight tried himself as a coach – preparing Wilder for the third fight with Fury. Despite the fact that they failed to win, Scott’s work was highly appreciated. Apparently, they will continue to cooperate.

The American mentor was asked who else he would like to work with. That
surprised response: “Dude, you know, there are so many really cool fighters around. But I would really like to coach the British Fraser Clark. I consider him a real talent. And when I see him in action, at times it seems to me that I am training him – he uses in the ring a lot of the things that I practice.

Clarke is the ex-first number in the amateur UK team, the winner of the 2020 Olympic Games and the European Championship. In 2022, he turned professional, already won 4 victories (3 ahead of schedule).

Previously, Scott dreamed of bringing Wilder in the ring with Usyk: “I sincerely believed that Alexander would attend our fight with Helenius.” And he also believes that “Usyk has a great chance with Fury.”