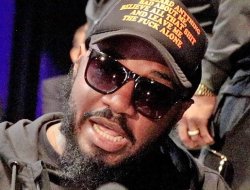 According to the coach, Joyce is incomparably more dangerous than his compatriot Anthony Joshua (24-3, 22 KOs), and also much more difficult than the Mexican Andy Ruiz Jr. (35-2, 22 KOs), with whom Wilder is likely to , will fight the next fight to determine the contender for the WBC title.

“I think Joe Joyce is a lot stronger than Anthony Joshua,” Scott says. – He has a cooler “motor”, a stronger handle, he is uncomfortable, and his style is deceptive. Joshua is a little predictable, especially now. Joyce is more imposing.”

“For us, Joyce is a much better fighter than Andy Ruiz when it comes to spectacular fights,” Malik said. Ruiz would be better from a market point of view because he is a former champion, but Joyce is a much tougher opponent. Joyce would easily beat Ruiz.”

Recall that on October 15, Wilder returned to the ring with a quick victory over Robert Helenius, knocking him out in the first round.

Meanwhile, the head of the WBC predicts Usyk-Joshua 3 and Fury-Wilder 4 fights.