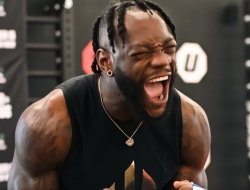 36-year-old ex-world heavyweight champion American Deontay Wilder (42-2-1, 41 KOs) does not plan to end his career soon and intends to perform in profiring for several more years.

He stated this to a PBC observer during a virtual press conference.

“I want to play for three more years,” Wilder says. “By the end of 40 years, we don’t have to guess about Deontay Wilder. We don’t need to assume anything. You hear it firsthand now because a lot of the media will choose to be first rather than tell the truth, especially when it comes to me, you know?”

“But now you hear it from me,” Deontay said. “I want to perform for three more years, until about the end of my 40s, and leave before I turn 41. After that, I want to do other things that I have planned for myself, I want to enjoy the rest of my life with my children, and build, build, build hereditary wealth.

On October 15, Wilder will return to the ring against Robert Helenius.