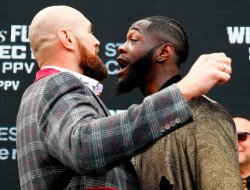 Former WBC heavyweight champion American Deontay Wilder (43-2-1, 42 KOs) named the best boxer in the history of British boxing. No, this is not Tyson Fury, with whom he has already fought three fights and is ready to meet for the fourth time. And not even the last undisputed heavyweight champion in history, Lennox Lewis.

wilder thinks best outrageous “Prince” Naseem Hamed, who ruled the featherweight division in the 1990s: “The best in Britain? This is “Prince” Hamed. He flew, hovered over the ring. Incredible confidence. You look at him and you can’t understand. Who the hell is this guy? He was so spectacular… This one knew how to entertain.”

The other day, Hamed was recalled by a boxing columnist from Britain: The coolest showman in the history of British boxing? No, it’s not Fury. And another expert is sure that a new Hamed has appeared in Britain: “This is a talent, he will soon be a champion.”

In the meantime, Wilder could return to the ring as early as March. His coach spoke about this and not only: “I sincerely believed that Usyk would attend our fight with Helenius.”