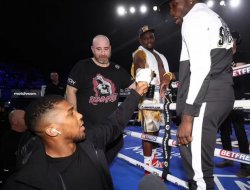 Rumor has it that he will hold the next fight in the spring against compatriot Anthony Joshua (24-3, 22 KOs), to whom he lost ahead of schedule in 2015. Immediately after the victory, Joshua approached White. He later admitted what he said to a potential opponent after he passed Franklin.

After the fight, White admitted that he still does not have any promised fight with Joshua: “My wishlist is my problem. I’m resigned to not being able to control what promoter Eddie Hearn and the bosses do
streaming DAZN. That’s how they decide – that’s how it will be.”

White argues that in the event of a defeat, “you would have to end your career.” Meanwhile, Joshua said they were ready to fight Wilder, not Dillian.