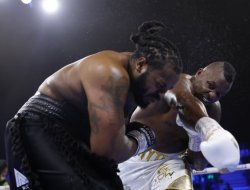 White started the fight at a leisurely pace. He crushed the opponent, jabbed. Franklin scored a couple of multi-hit combinations, occasionally trying to counter. At this pace, he looks very solid.

In the 2nd round, the favorite managed to briefly pinch the opponent in the corner, scored a couple of blows to the body. Franklin responded to this with combinations, did not invest in strikes – he really has good hand speed.

White increasingly attacked the body of the pot-bellied American, but he still worked with good efficiency, including in a shootout with jabs. The Brit kept trying to close the distance by simply hiding behind a block – a bad idea against a fighter with good hand speed.

In the 5th round, White was chastised by the referee for low blows. The Briton tried to slightly increase the density of the battle, imposed an exchange on the near, walked well along the hull. But his block is very flimsy. Franklin defended himself solidly. He is definitely not worse after the first half of the fight, but both visually do not look like top 10 heavyweight fighters.

White solidly spent the 7th round in the attacks, but missed the American’s dangerous counterattacks. Coach James McGirt demanded from the ward what he always requires: “Jab. Double jab. Triple jab.” Favorite looks tired. He tried to work from the jab, but so he gave the initiative to Franklin. Nothing surprising – in pure boxing, he is more mature and experienced, with a solid amateur career.

In the 9th round, the underdog completely shook the favorite. It was not possible to finish off, as the gong sounded. It is very interesting what the judges counted there. Franklin is acting too passive, given that he is not fighting on the road in the show of his promoter. If the competitive rounds go to White, it will not be easy to snatch victory. The Briton took the 10th three-minute period – he hit well in the last second.

The referee has already warned White several times. Will he risk a fine in the championship rounds? No, now Franklin got it – butts his head. The competitive 11th round went to the cries of McGirt – he desperately repeated his favorite word: “JAB!” David Haye has a score of 106-106 with three draw rounds 🙂

The American was too passive in the decisive round. He’ll be lucky if they get a draw. And he could have won.