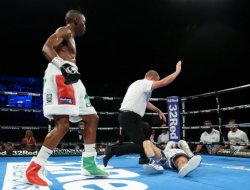 The other day it became known that ex-world champion Zolani Tete (30-4, 23 KOs) from South Africa failed a doping test and risks running into a 4-year suspension from boxing.

Briton Jason Cunningham (31-7, 7 KOs) reacted to this news, whom Tete brutally knocked out in July, taking away the IBF International title in the second bantamweight (up to 55.3 kg).

“I’ve never been dropped like that in my life,”
He speaks loser. What if the consequences were much worse? After all, accidents in boxing are not at all uncommon. What if I died? My baby is only 4 weeks old… I need answers! I deserve answers. Who knew that he was doping? When did they know it? It’s not like Conor Benn’s positive drug test. His fight with Chris Eubank was stopped before anyone could get hurt in the ring. Why then did my fight take place? Why didn’t anyone stop the fight? Why was this allowed to happen?”

In fact, problems with doping control in Britain have been talked about for a long time, but to no avail. It is even rumored that Benn has previously been caught doping – comments by Algieri and Miller. What do you think, what to do with the guilty? Fury’s “expert” opinion.