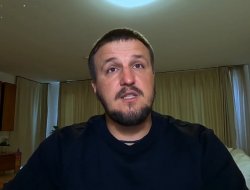 Alexander promised to report on where this money will be directed, but so far he has not done so. His promoter Alexander Krasyuk (K2 Promotions Ukraine) revealed the idea of ​​the Ukrainian boxing champion in an interview for the YouTube channel
boxofficeand also spoke about a charity evening in the United States.

Sasha was quite active. He was in the USA, Portugal, participated in charity events. Some of them were attended by you. I would like to ask, personally for me it is not clear how this story, which was in Beverly Hills, went. What was it: an auction, some kind of meeting? There was Vasily Lomachenko and Sasha Gvozdyk, Mauricio Suleiman came there. What was this event?

– It was a charity dinner, which was organized by the Usyk Foundation – Oleksandr Usyk’s charitable foundation. Its purpose was to raise funds to help Ukraine. As for sports, an event of unprecedented scale. Its direct organizer was Egis Klimas. And it really came out great.

Its essence is an auction where all sorts of things related to the career of Oleksandr Usyk were sold. The most expensive lot is a stone sculpture, Oleksandr Usyk’s glove with his autograph and the names of all the opponents he defeated at that time. In the hall they offered 40 thousand, online it was offered 50 thousand dollars for this glove. The person who purchased it wished not to reveal his name. The glove, in turn, was returned to the fund. As do many people who want to help. On the other hand, also online, but the person who allowed his name to be revealed is Canelo Alvarez. He bought a painting depicting Oleksandr Usyk. I don’t remember if I also donated 20 or 25 thousand dollars to the Usyk Foundation. Well, other smaller lots that sold out. And people gladly supported such an initiative. The buzz went all over Hollywood. This event did not go unnoticed.

– This is really important and Sasha, of course, well done. Big respect and Egis Klimas.

And such events strongly help the champion in his non-sporting initiatives. I don’t know, I can reveal the secret now. I did not agree with Sasha that I would voice it. But I am, in the language of Aesop. Here is a man from the bottom of his heart came up with helping people not in word, but in deed. Therefore, he began building houses in the suburbs of Kyiv. He finances it all himself. It is clear that no donations, no charitable funds will be able to finance 100% of this kind of project. Therefore, he finances it with his own funds. I will not say more, but I know that these houses are being built for people who have lost their homes.