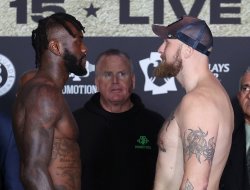 On the night of October 15-16, a boxing evening will take place in Brooklyn (USA), the main event of which will be a WBC heavyweight contender fight between former US champion Deontay Wilder (42-2-1, 41 KOs) and Robert Helenius ( 31-3, 19 KOs) from Finland.

Today was the official weigh-in ceremony of the boxers.

Note that before the previous fight against Tyson Fury in October last year, Wilder’s weight was 108 kg.

Helenius hasn’t been this heavy since 2016.