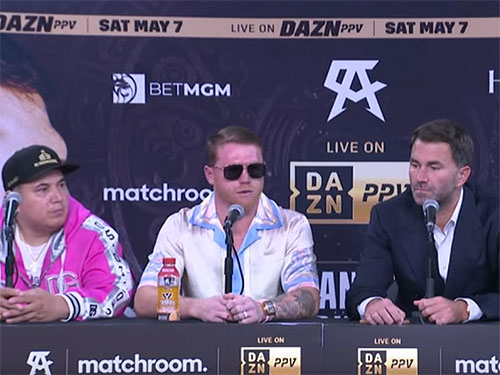 After the second defeat in his career, the absolute champion of the second middleweight (up to 76.2 kg) Mexican Canelo Alvarez (57-2-2, 39 KOs) answered questions from the American media at a press conference.

In Canelo’s Q&A series
commented last fight against the “super champion” according to the WBA light heavyweight (up to 79.4 kg) Russian Dmitry Bivol (20-0, 11 KOs), to whom he lost by unanimous decision with the same score 115-113.

– You lost to Floyd Mayweather. You’ve taken fights against a lot of fighters, but the way you fought tonight, you couldn’t do anything about it. Can you talk about your feelings, and what will happen next?

– I will not excuse myself. I felt like I won the fight. I may have lost four or five rounds, but I definitely didn’t lose the fight. I think I was a bit tired for the final rounds, but I felt good. Let’s see what’s next. Like I said, I don’t feel like I lost. Maybe some rounds, maybe the weight was a bit of an issue and I didn’t feel 100% during the fight.

– Can you tell us a little about how you felt in the fight and how it was assessed by the judges?

– As I said, Bivol won a maximum of 4 or 5 rounds. I felt a bit tired in the final rounds. Perhaps it was due to the weight.

What will you do differently in a rematch?

– Must be seen. I have to review the fight and do the work that needs to be done.

You said in the ring after the fight that it wouldn’t end like this. Can you go a little deeper?

“It won’t end like this. I think I am a very competitive person. I have many years ahead of me. I want to come back stronger.

– Do you agree that in boxing there is no more fight than a rematch with Bivol?

Yes, we want a rematch. We want to make it much better.

When you’re in the ring, when you’re tired, exhausted, when you don’t have any more energy, what motivates you to give that extra ounce of energy, that extra punch?

“Pride keeps me motivated. The desire to keep fighting is what drives me.

Canelo, there is no big debate about who won the fight. In the ring, you seem to have accepted defeat. What do you think the judges missed and what did you do that should have given you the win?

— It seems to me that people often do not take into account things that perhaps they should. For example, I blocked punches, lubricated them. I think sometimes mistakes were made in this.

Canelo, your power has been so devastating and effective in recent fights. There were clear moments tonight when you tried to just knock him out. Was there a moment in the fight when you were embarrassed that this guy should have already been knocked out.

Canelo, what are your thoughts now?

– I’m proud. I am very proud. I am a very competitive person. I got up and fought at 79.4kg, got out of my comfort zone, fought out of my weight. There is no shame in this. I look for challenges that others fear because they might lose. That’s why I’m here and that’s what I want to do. Nobody wants to see fights where people know in advance who will win. Everything revolves around 50-50 fights that people want to see.

Were you shocked at any point in the fight?

You are pursuing greatness. This is your second fight in this division. Do you see the rest of your career at this weight or are you focusing on one fight at a time? Will you try to get even for the defeat and think about the future after that?

– My most comfortable weight is 76.2 kg. It makes me feel the best. We need to see if we accept this revenge.

– Maybe it’s an option that you will fight Golovkin in the super middleweight? And do you think you’ll be back in September, or do you need a longer break?

We’ll see what fight is next. We will let you know.

“So there is no obligation for you to fight Bivol next?”

We’ll see what happens in the future, we’ll have to wait.

– What will you do tomorrow?

– Is this defeat harder than from Floyd Mayweather?

— No, I don’t think so. It seems to me that I can come out of the fight with my head held high, because I showed the best in another weight category. I’m looking for challenges. Challenges in my career pull me out of my comfort zone. I am proud and feel good.

Mayweather bet on Bivol’s victory: how much Floyd won

Before that, Golovkin was your biggest opponent. Do you think this confrontation will now define your career?

– After four rounds you were leading 4-0, but in the remaining match you won only a round, what are your thoughts on this?

– It does not matter.

– You leaned a lot on the ropes. Was it part of the strategy to try to draw him into the middle?

– The last time you felt the bitterness of defeat was in 2013. You are older now. Will this maturity help you overcome defeat?

– I feel myself good. As I said before, I keep my head high. I’m looking for challenges in different weight classes. And I’m looking for a way to take big steps, big things in my career outside of my comfort zone. I believe I had a good fight outside my weight class. Like I said, I feel like I won. There is no shame in this. I did what I did. I am proud of what I have achieved.

“I just spoke to Bivol and he says the only way to get a rematch is if you re-negotiate the terms that were originally signed because he only took this fight for the opportunity. Are you ready to do it?

Dmitry Bivol – Canelo Alvarez. Video of the best moments of the fight

– You said that you were a little tired by the end of the fight. Do you think it’s because of the extra weight?

Do you think losing will make you a better fighter? Go through a rematch, try to get even for a defeat – will it take you to new heights?

Yes, I always like to study. It seems to me that today I learned a lot, and I will show it to you in subsequent battles.

– You said that Charlo and Benavidez do not have a title, and you do not want to fight them. Do you feel comfortable knowing that you took on the toughest challenge and went through the fire in a different category against someone who was considered the best fighter?

“As I said earlier, I think it’s really important for me to get out of my comfort zone and take on these challenges in my career.

– You said you believe that you won the battle. During the fight, were there moments when you thought that maybe you were behind on the judges’ cards?

– And if you knew that you were behind in the score, would you fight differently?

— Would be more aggressive, I think.

— Can you say something to your fans from Mexico?

– This is boxing. You win, sometimes you lose. I gave the best version of myself and I will come back stronger. I’m glad to have your support.