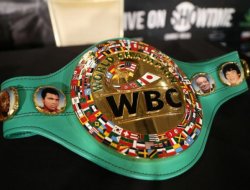 The World Boxing Council does not want to stop with experiments, and after the introduction of the “franchise” title and bridgeweight is going to step much further, and this will be a tectonic innovation. In an interview
The Telegraph WBC President Mauricio Sulaiman has revealed that his company is developing plans to address the issue of transgender fighters in boxing.

In 2023, the council will launch a “global call” for trans athletes if they want to compete to create their own separate league or tournament, he said.

Such fighters will not be allowed to fight non-transgender fighters.

Suleiman believes that it is necessary to ensure that there will never be a situation where a man is allowed to fight a woman – regardless of the sex change.

“We’ll set protocols, start consultations, and most likely create a league or tournament,” he said. “The time has come to do it, and we are doing it for reasons of safety and inclusion. We were leaders in the rules of women’s boxing. In boxing, it should never be a man fighting a woman, regardless of gender change. There shouldn’t be a gray area around this and we want to approach it with transparency and the right solutions.”

Suleiman promised that a set of rules and structures would be created “so that transgender boxing can exist as they fully deserve if they want to box.”

“We do not yet know how many such applicants exist, but we will open registration in 2023,” the head of the WBC added.

The publication notes that in recent years there have been cases in boxing when transgender fighters have achieved some success. For example, Patricio Manuel was a five-time U.S. Women’s Amateur Champion before failing to qualify for the American team for the 2012 Olympics. Manuel began hormonal treatment in 2014, underwent sex reassignment surgery the following year, and made his debut as a male boxer in 2018 by defeating Hugo Aguilar on points. Since then, the 37-year-old fighter has not competed.