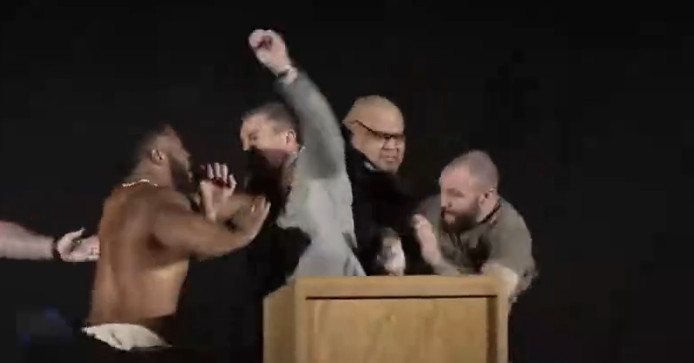 Lorenzo Hunt and Mike Richman brought down the house – or at least the house backdrop – when they brawled onstage at the KnuckleMania 3 press conference on Thursday.

The middleweights became very testy during media interviews. They then started to get physical when they were confronted at the Albuquerque presser.

Hunt made contact first, striking Richman with his bare-knuckle chin. BKFC President Dave Feldman tried to stop him. Richman ducked under and shot for a takedown on Hunt, his opponent on Feb. 17 at Tingley Coliseum in Albuquerque, and the two briefly spilled over the dais. On their trip down, they brought the media backdrop as Feldman, security and other BKFC fighters attempted to regain control.

Hunt and Richman split eventually, and BKFC was raised again.

“It’s not something that we want – we don’t want to have these kind of antics up here,” Feldman said after the skirmish. “But at the end of the day, you have two guys that are A personalities, that think they’re the baddest man on the planet, that go face-to-face and don’t really like each other. Sometimes, this type of thing is going to happen.

“It happened here unfortunately. But on the same respect, I think it’s just a little preview of what you’re going to see here. … You’re going to find out who the best 185-pound bare-knuckle fighter in the planet is.”

It wouldn’t have been the last time Hunt or Richman clashed as they continued their bickering until the end.