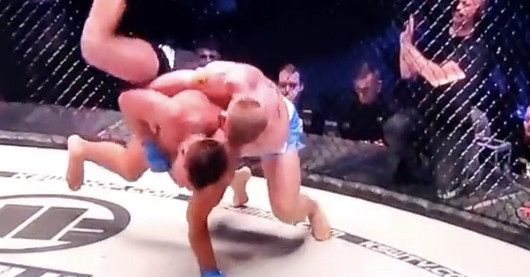 KSW 70 prelim fighter Tommy Quinn suffered a badly dislocated elbow when he posted his arm as Albert Odzimkowski slammed him to the mat in the second prelim of the Saturday pay-per-view in Lodz, Poland.

Quinn hoped to avenge a TKO loss to Odzimkowski – later overturned to a no-contest – but was dropped multiple times before the sudden stoppage, which forced referee intervention at the 2:56 mark of the opening frame at Atlas Arena.

Below is a short video showing the shocking injury caused by the tackle.

As he was being treated by medics, Quinn could still be heard screaming for help. His arm was immediately put in an air cast as he was led out of the arena; one commentator clarified he did not suffer a broken arm but “ligamental damage.” Prior to meeting Odzimkowski, the Ireland native, nicknamed “The Roly Poly Kid,” had won two straight including an appearance at Bellator Newcastle.

He does it!! @OdzimkowskiMMA finally has his first official win in KSW!! #KSW70 pic.twitter.com/MJ8D6tNe01

After the loss in the first fight, and three losses under the KSW banner,

Odzimkowski was back to the winning column.