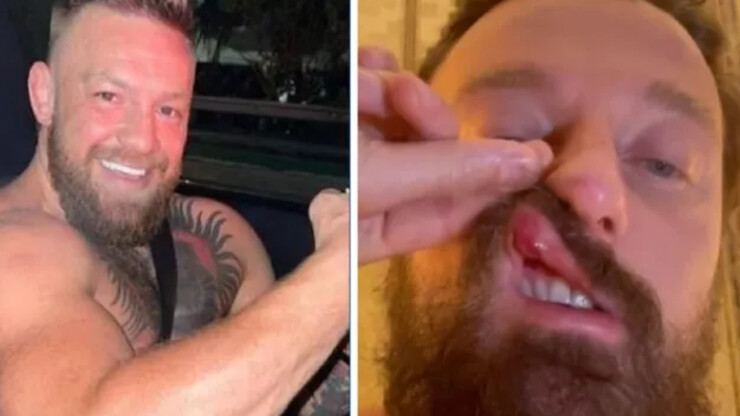 Irish MMA fighter Conor McGregor landed in yet another scandal. The athlete beat the famous Italian DJ in Rome.

McGregor punched an Italian singer and TV presenter named Francesco Facchinetti while visiting a nightclub. This happened a few hours after the Irishman’s third son was baptized in the Vatican.

DJ Facchinetti claims he and his wife had been partying with McGregor for two hours prior to the incident before things went awry. McGregor punched the DJ in the face and broke his nose.

Francesco Facchinetti He said that he plans to sue McGregor:

“At 02:30 this night I was attacked by Mr. McGregor. He punched me in the head and broke my nose in front of ten witnesses, his friends and his bodyguards. He attacked me without any motivation. Before that, we talked for more than two hours; and had fun together.

I could shut up and say nothing to anyone, but I’m here to talk about this incident. I have to say that this man is really cruel and dangerous. I got hit for nothing. This blow could have gone to anyone. To my friends, my wife or other people. That’s why I decided to sue Conor McGregor because he’s a violent and dangerous person.”

Facchinetti’s wife wilma She also shared her account of what happened:

“McGregor hit Francesco in the face out of nowhere. He invited us to another party. Francesco said, “Okay, let’s go.” And he hit him. Luckily, Francesco was very close, so McGregor couldn’t swing too hard to use his punch to the fullest.

Francesco flew off, fell to the table and then to the ground. The first thing that came to mind was: Are we kidding? This show? Then I became paralyzed. I turned around and saw that McGregor was pinned against the wall by his friends because he wanted to continue beating Francesco. Then they took him away. I turned on the light and the guards turned it off. Francesco was bleeding. I wanted to help him, but the guards drove us away.

If you see McGregor, stay away from him. Don’t approach him and don’t ask for autographs because he’s unstable and dangerous.”

Lutadora do UFC Veronica Macedo: “Gan finaliza Ngannou no 4º round”