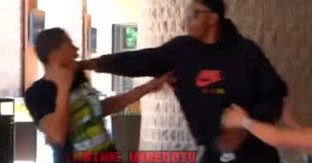 It’s a really bad idea to pull a prank on a professional fighter, as one man nearly found out.

Jamahal Hill, currently the No. 14-ranked light heavyweight in the MMA Fighting Global Rankings and a renowned knockout artist, was recently set up for a prank by his manager, Brian Butler-Au, and things nearly took a horrible turn.

In the prank, ImReddttv pretends to be on the phone, walks up to Hill and says, “I’ll still try your ass, on God. You heard what I said.” At this point Hill makes an aggressive move toward him, but Hill’s manager grabs the light heavyweight contender as ImReddttv backs away repeating, “It’s a prank!”

After the fact, Hill took the whole thing in stride and posted a video of it on his Instagram.

Hill was most recently seen in the octagon in February when he picked up his second straight knockout win, a first-round stoppage of Johnny Walker at UFC Vegas 48.