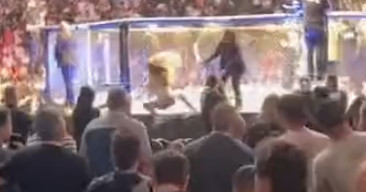 A disclaimer to all UFC fans: If you try to rush the octagon, bad things are going to happen.

One particularly foolish fan found that out over the weekend at UFC 274. In a clip uploaded on Sunday by TikTok user Shriak Sharma, the offending attention-seeker vaults over a barrier in the stands and attempts to rush the cage amid the ensuing chaos of Charles Oliveira’s first-round submission win over Justin Gaethje. The young woman, who is unidentified in the clip, manages to climb just feet away from her goal — before promptly getting tossed to the floor by security in Phoenix’s Footprint Center.

Video footage of the scene can be viewed below with additional commentary by Sharma. “Disclaimer”: I don’t know the girl, and I’m very lit at the moment, don’t mind my voice

Everyone, do not try rushing the cage at a UFC event pic.twitter.com/dCwfTVKdZk

A Footprint Center official told MMA Fighting Monday that the victim was treated by medical personnel after the incident.

” It was quickly dealt with, and she was removed from the arena,” said the official.