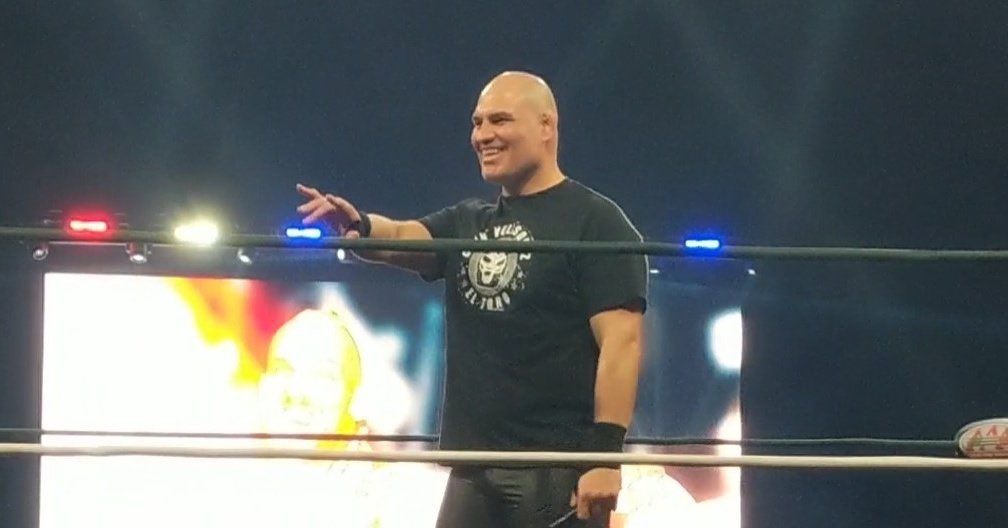 TEMPE, Ariz. — If only for one night, Cain Velasquez was back home, doing what he loves.

In his first public appearance after being granted bail in his attempted murder case, Velasquez wrestled in a three-on-three pro wresting match with Lucha Libre AAA, which took place Saturday at the Mullett Arena near Velasquez’s alma mater of Arizona State University.

Velasquez was a former UFC Heavyweight Champion and received standing ovations as he spoke to the crowd.

“To be here, in front of you guys, right now, it’s a dream come true,” Velasquez said. “I truly appreciate it all, what you guys have always done, supporting me, my family.”

Velasquez was released from jail in November after posting $1 million bail, giving the 40-year-old former champ his freedom for the first time since his February arrest. He is accused of engaging in an 11-mile high-speed chase with Harry Goularte, the man accused of molesting his close family relative — a four-year-old child who has since been identified as Velasquez’s son. Velasquez is alleged to have fired an. 40-caliber handgun into a car carrying Goularte, Goularte’s mother, and Goularte’s stepfather Paul Bender, the latter of whom was allegedly struck twice by the gunfire, resulting in non-life threatening injuries.

But on Saturday, Velasquez returned to the ring for the same promotion he made his pro wrestling debut in back in 2019. The former champ competed in a spirited match with several high-flying spots and ultimately scored the winning pin for his team, much to the delight of the Tempe crowd. The match’s finishing sequence can be seen below.

Velasquez with the pin! The eruption is just beginning. pic.twitter.com/bT1lCbMXFf

Afterward, Velasquez removed his mask and addressed the crowd once more, thanking them again for their support and leaving them with one final message.

” “Never give up on believing,” he stated. “Never stop fighting.”