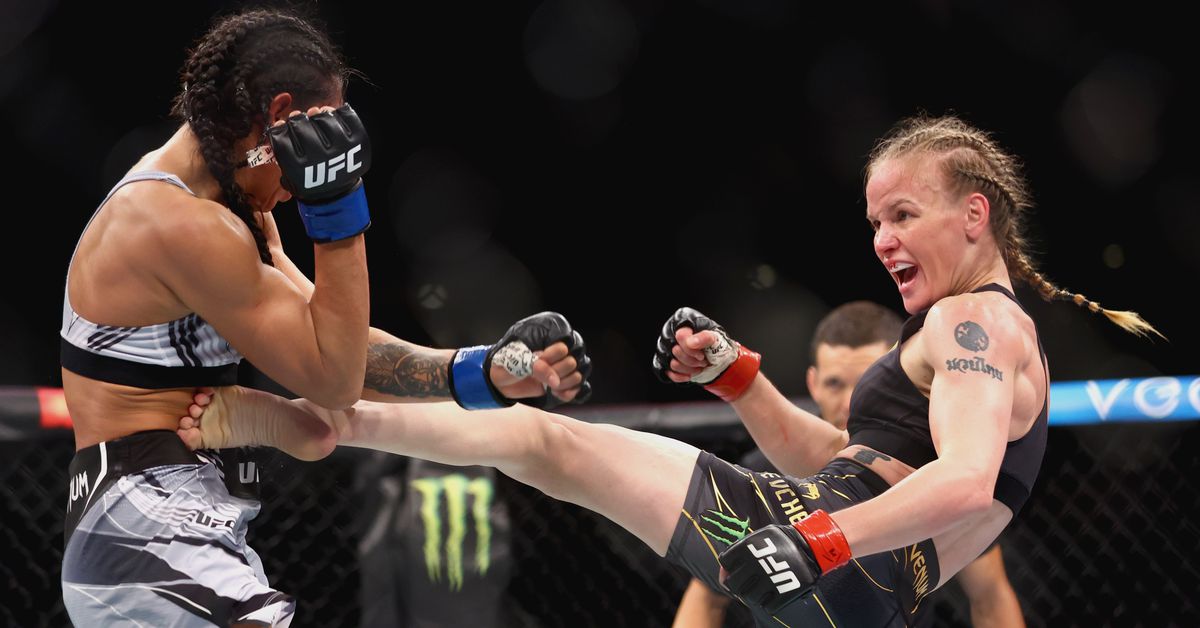 Valentina Shevchenko never considered pulling out of UFC 275, but it turns out the reigning flyweight champion was at a physical disadvantage in her fight with Taila Santos.

Following her split decision win in the co-main event, Shevchenko addressed why she didn’t perform her typical dance to celebrate a victory, and that’s when she revealed details about an injury that plagued her in the days and weeks leading up to the card.

“Coming into the fight, I was injured,” Shevchenko said at the post-fight press conference. My foot had been injured. All week, fight week, UFC Performance Institute, physical therapists they were working on my foot to get it back into the best shape. The few kicks that I had like super strong, it injured my foot. That’s why I was willing to dance but we’re going to have to do an X-ray. Although I do hope that it is not something serious, this was the main reason I did not dance.

” Are you thinking of pulling out? Never. Every time I have something, I try to deal with that first and actually I could not walk on my foot when I got this injury. It was impossible to jump on. But thanks to the [physical therapists],, they were able get me back. I felt okay. You feel all the adrenaline when you are in a fight and you don’t care what happens .”

In her seven title defenses at flyweight, Shevchenko had barely dropped any rounds ahead of her fight against Santos. But the Brazilian challenger put her in some bad positions, especially in the early going.

Despite the obstacles she faced, Shevchenko was actually happy with the result because she actually found someone to push her and in the end there was no doubt in her mind that she deserved the win.

” This is what I was looking for,” Shevchenko stated. Opponents that aren’t giving up, who fight until the last second and show their true colors, can win. Your character, your mindset, you can kind of get what is yours — victory.

” No matter how tough it is, no matter what. This is like expressing who you really are. I’m happy.”

While Shevchenko acknowledged that judging in MMA is unpredictable, she was confident that her performance would earn her the victory on the scorecards.

” I worked hard until the end of the fight in order to win, and to raise my hands up,” Shevchenko stated. “When it’s judges you never know but if you work out everything you have and leave your heart and soul in the fight, you will be proud of yourself no matter what.

“Nothing surprised me. Even though she was on mine, it didn’t seem like I had any place. Like oh my God, this is tight and you have to work on your character. There was none. She was also inactive. Even though I was in that situation, I was striking. I also felt the power of strikes. I could feel her reaction because she was suffering. This is what counts the most in mixed martial arts. Damage.”

With the win, Shevchenko has now dispatched yet another contender at 125 pounds, and her options in the division are starting to look limited, which is why many believe a return to bantamweight could be coming sooner rather than later.

Given that Shevchenko has a win over the current champion Julianna Penna, as well her rivalry with Amanda Nunes’ past fights, both of these fights could prove to be interesting. However she isn’t closing down on flyweight yet.

” I must mention that in July, we had an incredible fight between two strong fighters at flyweight. Shevchenko confirmed that it was Lauren Murphy and Miesha Te. “It’s going to be an amazing fight. Lauren Murphy wins, it’s possible for a rematch to be held but probably not too soon. Miesha Tate wins the fight, I think this is what fans are going to love to see and end of the year, pay-per-view, main event, I think it’s going to be great.

” Another option are Julianna or Amanda in bantamweight. Once it’s going to be more towards finalizing, I will work to building my body a little bit heavier, just a little bit so not to lose the speed. There are many options available to me .”