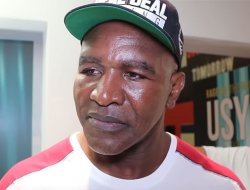 Former absolute world champion in the heavy (up to 90.7 kg) and heavyweight (over 90.7 kg) divisions, American Evander Holyfield gave
interview for the British media.

In a conversation with a journalist, the boxing legend commented on the rematch scheduled for Saturday, August 20 between the unified heavyweight champion from Ukraine Oleksandr Usyk (19-0, 13 KOs) and the former holder of three titles from Britain Anthony Joshua (24-2, 22 KOs). Holyfield also spoke about the theoretical fight against Usyk and answered the question about the third fight between Canelo and Golovkin.

– Usyk and Joshua’s rematch is fast approaching, what do you think about this fight?

“It should be a good fight. I think for a good fight both fighters have to fight the way they should fight. This is a battle between a small and a big fighter. This means that when a small guy comes out, he has fast hands, good movement. And when it comes out big – strength and big blows. Therefore, it all comes down to what kind of battle they will fight.

You told me earlier that in big fights it comes down to who hits faster and who hits first. Do you think this applies to this fight as well?

– Of course. If you don’t land big punches, then a small fighter will rework you. Plus he has power. Sometimes it can hit and shock you.

– You are a legend, many people compare how you would fight against Oleksandr Usyk. What would you say to that if this fight ever took place?

– You have to understand that when Usyk appeared, I was much older. But in general, this fight would probably have been difficult for me, because the guys with whom I really performed well were bulls, that is, they were aggressive fighters. There are also very aggressive fighters and there are boxers. So I was a boxer. I could beat the aggressive guys because they fought according to my plan. The only thing that gives you problems is fighting who you are. This is about me. The fighters who weren’t aggressive were difficult for me, but when you were aggressive it was much easier.

Do you think that we will see a duel between the winner of this fight and Tyson Fury? Is this the fight you want to see?

— I thought Tyson Fury retired. Once a fighter ends his career, then he no longer performs. Actually I think people are coming back. I know this has happened before, but you never know.

– Will you hold another exhibition match in the near future?

What is your prediction for Canelo vs Golovkin 3?

– This is a good fight. I haven’t seen Golovkin’s last fights. I know he’s back, but until you see the fighter in the midterm, you really don’t know. Does he really come back, does he really fight, does he have the same skills, does he still have muscle memory and all the other things that he had.

Charlo stuffed Crawford: “Do you want 69.9 kg? Even Lubin will knock you out!”