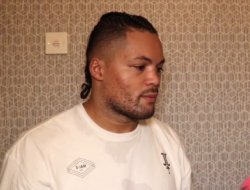 In a conversation, the newly-made “interim” WBO champion commented on the victorious fight and spoke about his desire to fight against the unified champion from Ukraine Oleksandr Usyk (20-0, 13 KOs), the WBC title holder Briton Tyson Fury (32-0-1, 23 KOs) or ex-champion from Britain Anthony Joshua (24-3, 22 KOs).

— I told Frank (Warren) after the fight that it was a fucking fight [смеётся].

– I agree [смеётся]. He was a tough guy, kept going forward. I saw how in the seventh or eighth he began to feel the blows, but he held on and continued to hit the body and head, still continued to fight a difficult fight for me. He is an excellent fighter. I enjoyed the replay of my knockout. I finished him with a left hook.

Were you surprised by how much he missed from you and how he was still able to stand on his feet until round 11? I think many of us were surprised.

“I knew he was going to be a tough and tough fighter and I had to go deeper because I knew he would last 12 rounds. I hit him with everything, forced the pace, gave my all, but he continued to go forward. So respect to him, he’s a tough guy.

– Congratulations, you are now an official WBO mandatory challenger to Oleksandr Usyk. As if everything is returning to normal, fate brings you back together. Remember, we talked about it in the past, that if you succeed, you will get even for your defeat?

– Yes Yes. This is a tough fight. It’s a slightly different fight, he’s left-handed and he’s a little faster. You will need to hit down. He is a very difficult fighter. It’s a tough fight, but I think I can handle it. I think I have what it takes to beat him.

“A lot of people keep saying that you just have a granite chin, that you are someone who goes forward but takes a lot of punches, and you were never given the credit you deserve as a good boxer. Do you think you silenced those critics with your performance today?

— Yes, that was kind of the goal, and I’m glad about what we worked on in the hall. I wanted to show my class and that I am more than just a forward, throwing and receiving fighter. I proved it today.

How would you rate Joseph Parker’s strength? It looked like he landed really clean punches on you. Did any of them shock you?

– Yes, there were several blows to the body. I’m starting to feel all the bruising on my face. Although I look fresh, but a few of my ribs, my belly… Yes, he delivered some good plop. Got them in combination. It was difficult, he stepped back from a distance and also quickly turned on. But I knew that he would do it, my corner told me about it. I knew what he would do, but he still did it. He was strong and skillful in attacks.

“When he delivered blows to you, they had no effect, not once.

Is it correct to say that you have the strongest chin in the heavyweight division?

“Maybe, but I wouldn’t rely on him, and that’s why I’m called the Juggernaut.” Because I can take hits and keep momentum moving forward.

– Do you have a message to Oleksandr Usyk? Until the time comes, we don’t know. You could face Tyson Fury and even Anthony Joshua depending on how the heavyweight puzzle plays out.

“I mean Usyk, Fury, Joshua, let’s do it. Let’s sign a contract. You have seen what I can do at this level. Mustache, I’m coming for you!

– Do you want revenge?